In his cross-examination, Miomir Zuzul, testifying as Jadranko Prlic’s defense witness, agreed with the prosecutor only about the fact that he was a supporter of the policy pursued by former Croatian president Franjo Tudjman until the very end. In other words he was ‘a president’s man’ 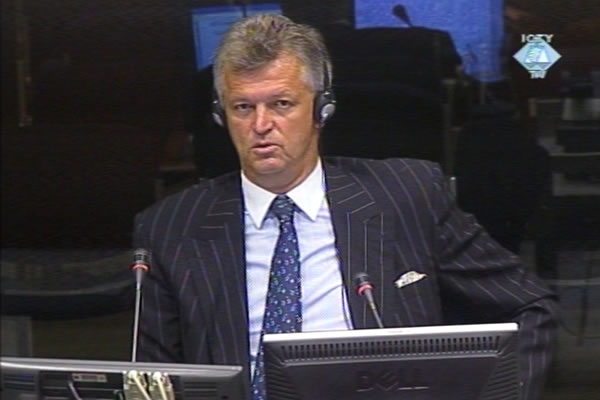 Miomir Zuzul, defence witness of Jadranko Prlic
Former Croatian defense minister Miomir Zuzul gave evidence in The Hague in the defense of Jadranko Prlic, former Herceg Bosna prime minister. In his cross-examination, he agreed with the prosecutor about only one thing: that he remained loyal to the former Croatian president Franjo Tudjman’s policy until the very end. In other words, he was ‘a president’s man’. On the last day of his evidence, Zuzul denied all allegations about the involvement of Tudjman and his close associates in the joint criminal enterprise aimed at, as alleged in the indictment, the separation of parts of BH territory and their annexation to the neighboring Croatian territory. ‘Nobody in Croatia ever considered this option’, the witness contended.

The prosecutor quoted from a book written by Warren Zimmerman, the last US ambassador to Yugoslavia, describing in details Tudjman’s monologue on the need to divide BH between Croats and Serbs because Muslims wanted to turn it into an ‘Islamic fundamentalist state’. The witness replied that in his book the American diplomat only presented his ‘subjective impressions’ in an effort to ‘justify his wrong assessments when the break-up of Yugoslavia started’.

When the prosecutor showed him quotes from a book by Mate Granic in which former Croatian foreign minister – who was the witness’s immediate superior for some time – wrote that the restoration of the Croatian Banovina within its 1939 boundaries was Tudjman’s ‘obsession’, the witness was surprised because ‘his friend and former superior’ never mentioned anything like that. Zuzul noted that Tudjman would agree to the division of BH if this was an option proposed by the international community. Since this was not the case, Tudjman ‘respected BH’s sovereignty’. Zuzul went on to add that he was testifying ‘under oath’, while Granic wrote his book as part of a political campaign.

The witness’s response was the strongest when a book by Ivo Komsic was quoted to him. Komsic, a member of the BH wartime presidency, described Zuzul as a man with whom it was difficult to have any dialogue. When they met once in February 1994, Zuzul hurled insults at Komsic; he even threatened Komsic, telling him they ‘had Komsic’s family in Sisak under control’. ‘You set Boban free, but you will never be able to do that with Tudjman’, Zuzul allegedly said to Komsic. The witness called Komsic a liar, adding that he never threatened anybody.

During his cross-examination, the prosecutor brought up the Croatian Army presence in BH during the Croat-Muslim conflict in 1993 and documents showing that Croatia drafted young men sent them against their will to fight for the HVO in Herzegovina in the second half of 1993 and early 1994. The witness was showed a series of newspaper articles and documents in which Croatia publicly denied its knowledge of the whereabouts of the accused Ivica Rajic. Throughout that time, Rajic, who has in the meantime been convicted and sentenced by the Tribunal, was on the Croatian Defense Ministry payroll. Zuzul denied everything, saying he had ‘no knowledge’ of any of that or was merely ‘pursuing’ his government’s policy at the time, something he saw as his duty.