Zoran Buntic, lawyer from Citluk, is giving evidence in the defense of Jadranko Prlic. He claims that Herceg Bosna was not conceived as a state and there were no aspirations for it to gain this status. It was created solely as a form of defense against the Serb aggression 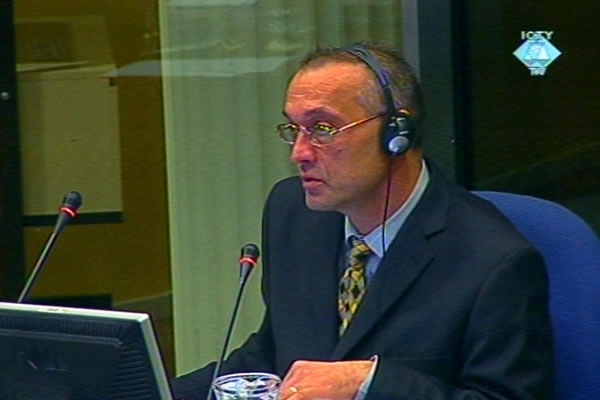 Zoran Buntic, defence witness of Jadranko Prlic
‘Herceg Bosna was not envisaged as a state and there never were any aspirations for it to become one’, Zoran Buntic contended. Buntic is a former head of the Office of Justice and Self-government of the so-called Croatian Community of Herceg Bosna, which would later become the Croatian Republic of Herceg Bosna. In his evidence in the defense of Jadranko Prlic, former Herceg Bosna prime minister, Buntic claimed that the Bosnian Croat community was established primarily to serve as a form of defense against the Serb aggression. In his view, this goal was implemented successfully; unlike the other goal, whereby Herceg Bosna was to become a separate constituent unit within the BH borders.

According to the prosecutor, Prlic and the other five accused Bosnian Croat leaders were participants to the joint criminal enterprise aimed at the annexation of parts of BH to the neighboring Croatia in order to restore the borders of the Croatian Banovina from 1939. This aim was implemented by the ethnic cleansing of the Muslim population in Herceg Bosna. Jadranko Prlic’s defense contests the allegation, claiming that the HZ HB functioned within the legal framework of BH.

In order to corroborate this argument, Prlic’s defense counsel Michael Karnavas showed a proclamation by Mate Boban from July 1992, where the former Herceg Bosna president demands that ‘nothing should compromise the integrity of the sovereign BH’. The witness confirmed that such statements reflected the attitude of Jadranko Prlic and the HZ HB towards BH at the time. Apart from this document, the defense used this witness to tender into evidence a series of orders confirming the accession of municipalities, whole or in part, with the Croatian majority population to the HZ HB.

When the conflict broke out, the HVO set up the BH Public Prosecutor’s Department in Mostar only because it was not ‘possible for the public prosecutor to exercise its powers outside of Sarajevo’, the witness said. In his words, this was done in ‘the same manner’ in other BH municipalities cut off from Sarajevo, such as Bihac, Tuzla, Zenica and others. As he clarified, the HVO simply looked for a ‘model that will function’. However, the witness was not able to explain why the official title of this detached department in the public prosecutor’s office said Herceg Bosna, rather than Bosnia and Herzegovina.

The witness continues his evidence tomorrow.