RAGUZ: WOMEN AND CHILDREN WERE USED FOR POLITICAL ENDS IN SARAJEVO

The defense of Jadranko Prlic continues its case with the evidence of Martin Raguz, member of BH parliament. The witness confirms the defense argument that the government in Sarajevo wanted a unitary BH and that BH Croats were ’forced’ to get organized, and goes on to say that women and children were used for political ends in Sarajevo under siege 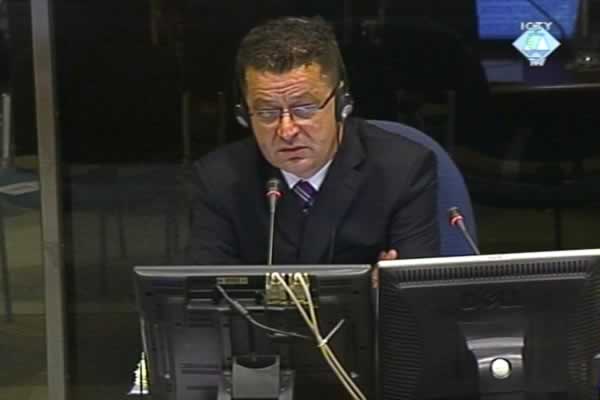 Martin Raguz, defense witness for Jadranko Prlic
Martin Raguz, member of BH parliament, is testifying as a defense witness for the former Herceg Bosna prime minister Jadranko Prlic. Today, he confirmed some of the arguments presented by the former Bosnian Croat leaders. The Bosniak-majority government in Sarajevo wanted a unitary BH, Raguz confirmed. Because Sarajevo was isolated, Croats were ’forced’ to get organized on their own. The Republic of Croatia took care of the refugees and displaced persons from BH ’going beyond its actual capabilities’. Raguz also confirmed that local authorities were in charge of providing accommodation for refugees in the territory of Herceg Bosna: this means that the government headed by Prlic had nothing to do with it.

In June 1992, Raguz was appointed minister of labor, social welfare and refugees in the BH government; he was a member of Liberal Democratic Party. In late December 1992, he left Sarajevo and went to Zagreb to join his family and ’celebrate the New Year’s eve together’. Believing he would be able to perform his ministerial duties ’more efficiently’ from Zagreb, Raguz didn’t return to Sarajevo. In May 1993, he accept the post of the deputy chief of the Office for Refugees and Displaced Persons for Herceg Bosna. After that, in July or August 1993 he was removed from the office of minister in the BH government.

In the first part of his evidence Raguz described the accused Prlic as a very competent man with ’great organizational skills’. In his opinion, it was because of those qualities that Prlic was appointed in November 1992 as a representative of the BH government for cooperation with the neighboring Croatia.

Prlic’s lawyer Michael Karnavas quoted to the witness from a book by former Balkans envoy David Owen. Owen says that a conversation with the then president of the BH presidency Alija Izetbegovic led him to conclude that the authorities in besieged Sarajevo intentionally kept women and children in the city instead of moving them out. The witness said that he wouldn’t want to say ’whether that is how it had to be’, but that in his opinion, the BH government kept the women and children in Sarajevo to implement its political goals, maintaining the picture of a city where civilians died daily.