ONE DETONATION FAILED, THE OTHER WAS NOT RECORDED

The cross-examination of Professor Slobodan Jankovic continued, with Jankovic maintaining there was a high likelihood that the Old Bridge in Mostar was destroyed by an explosive charge rigged to it. However, after watching the recording showed by the prosecution, he was five percent less convinced of that. In his view, there were actually two detonations at the base of the bridge. The first one failed and the other was not recorded 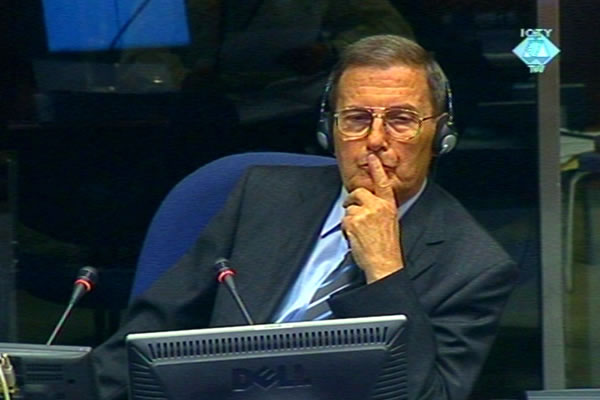 As alleged in the indictment, the bridge was destroyed by shells fired from HVO positions on the Stotina hill. The defense is trying to prove that the bridge was destroyed when the BH Army forces set off an explosive charge rigged to it. To corroborate this argument, the defense asked the witness and two other explosives experts – Muhamed Suceska and Aleksander Sikanic – to make an expert analysis.

The expert team concluded that the bridge was destroyed when a fuse was set off. This conclusion was based on the analysis of two short video recordings made by Mostar TV and ORF, an Austrian broadcast company. The recordings showed a brief flash under the bridge followed by black smoke and a water wall. The experts corroborated their findings by conducting an experiment at a lake in an undisclosed location. The witness said he was eighty percent sure that his findings were correct.

Yesterday, prosecutor Kimberly West showed the witness a longer recording taken on 9 November 1993 showing a detonation identical to that seen in the clips analyzed by the experts, but also that the bridge did not collapse after the detonation, despite the heavy damage it had sustained. This appeared to have shaken the witness’s self-confidence. He seemed to have recovered overnight and today he claimed he was just five percent less sure of his findings now, after he had seen the footage; he was no longer 80 percent sure, but 75 percent. The witness had a new theory to explain the fact that the recording shows the bridge collapsing a minute and fifty seconds after the appearance of the ’water wall’ ostensibly caused by the explosion in the Neretva river. There were in fact two detonations of the explosive charges rigged to the bridge. The first one failed and the second one was not recorded, he said.

The prosecution tried to show that the recordings used in the defense expert’s analysis had been edited and were thus insufficient for any serious conclusions about the causes of the destruction of the Old Bridge. The witness admitted that cuts in the recording between the flash, smoke, water wall and the destruction of the bridge were apparent in the two recordings he analyzed, but was unable to explain why no mention of this was made in the report. The witness added that he couldn’t give a precise opinion on the recording showed by the prosecution without a detailed examination in a studio with special equipment.