HOW THE OLD BRIDGE WAS DESTROYED

In the first part of the cross-examination, the prosecution challenged the argument put forward by General Slobodan Praljak’s defense through the testimony of his expert witness. According to Praljak's defense, the Old Bridge in Mostar was 'most likely' destroyed when the explosives rigged on the bridge blew up, not when it was hit by a shell fired from a HVO tank 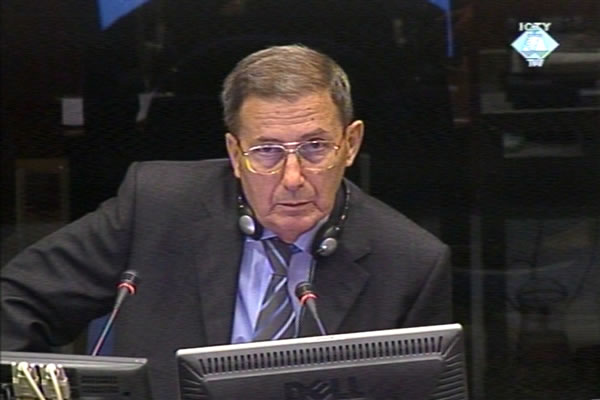 Slobodan Jankovic, defence witness of Slobodan Praljak
The Old Bridge in Mostar was 'most likely' destroyed by an explosive charge rigged to it and not by a tank shell, Professor Slobodan Jankovic stated as the trial of former Bosnian Croat leaders continues. Jankovic is one of three experts who authored an expert analysis of the destruction of the bridge on 9 November 1993 for the defense of General Slobodan Praljak.

The witness arrived to this conclusion together with two other explosives experts, Muhamed Suceska and Aleksandar Sikanic, by analyzing two short video recordings made by Mostar TV and Austrian broadcast company ORF. Since the Mostar TV recording was 'unclear' the experts used the material recorded by the Austrian television showing the Old Bridge immediately before it was hit, the moment when it was hit and the aftermath of its collapse.

According to their analysis, the 'most likely' cause of destruction was an explosive charge planted below the water surface and below the bridge which was detonated at a later stage. As the witness clarified, the flash that can be seen below the bridge, the thick black smoke and a water wall caused by the detonation all point to such a conclusion. After that, the bridge collapsed on the recording used for the analysis.

To corroborate this, the authors conducted an experiment on a lake where they set off an underwater dynamite charge and then recorded the explosion. The recording showed a water wall on the surface similar to that seen on the recordings of the destruction of the Old Bridge.

The prosecutor contested this part of Slobodan Praljak's defense case at the very beginning of the cross-examination. She showed the witness a longer recording where the bridge is still standing, although it has sustained heavy damaged following the flash, the smoke and the water wall. When he was asked if his findings would be different had he seen that recording, the witness agreed. Yet when the accused Praljak intervened saying that the recording 'may have been edited', the witness recanted, saying that the recording should be analyzed in detail to check for continuity.

The cross-examination of Professor Jankovic, former JNA lieutenant colonel and artillery expert, will continue tomorrow. Jankovic is giving evidence before The Hague Tribunal for the third time. The Trial Chamber decided to allow Praljak’s defense to call him because Michael Karanavas, the defense counsel of the first-accused Jadranko Prlic, will be busy this week in another case before the tribunal for the Khmer Rouge crimes in Cambodia.