Continuing his evidence at the trial of the former Herceg Bosna leaders, Mile Akmadzic describes Fikret Abdic as a man ‘loved by all’ in his home region. He was a man who opposed the ‘islamization of BH”, Akmadzic said. In his cross-examination, the prosecutor wants to know why the witness claimed Alija Izetbegovic was ‘good’ when he testified at the Dario Kordic trial, whereas now he characterizes Izetbegovic as ‘bad’ 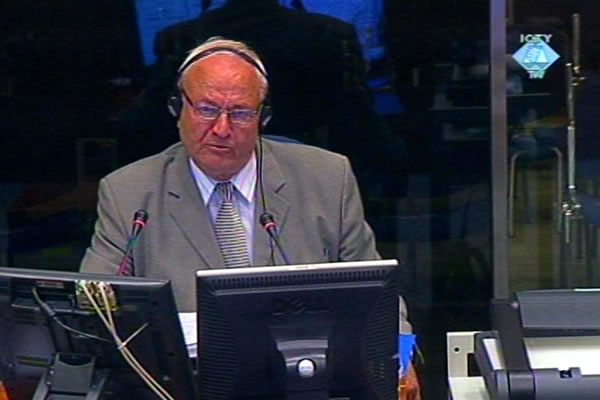 Mile Akmadzic, defence witness of Jadranko Prlic
Mile Akmadzic, president of the BH war government, continued his testimony at the trial of former Herceg Bosna leaders. He described Fikret Abdic as a man ‘loved by all in his home region’, in Bihac and Cazin. According to Akmadzic, Abdic was ’unjustly accused’ by his political opponents of wanting to annex this part of BH to Croatia.

In Akmadzic’s words, Abdic openly opposed the ‘islamization of BH’. When he realized that Bihac and Cazin were too far from Sarajevo, Abdic established the Autonomous Region of Western Bosnia, modeled after the provisions of the Vance-Owen peace plan which envisaged the division of BH into provinces. In the witness’s opinion, this was done in an effort to normalize life in that part of BH at least to some extent; this was why, he added, Herceg Bosna was created too. Abdic was convinced that the Islamic lobby headed by Izetbegovic ‘wanted his head’, the witness said. When Abdic and Akmadzic met in Geneva during the negotiations, Abdic allegedly told him that he ’will not allow them to kill him’.

In the last elections before the war broke out, Fikret Abdic got most of the votes on the SDA ticket and was supposed to be appointed the president of the BH presidency. However, this did not happen because the party presidency gave a vote of confidence to the second on the list – Alija Izetbegovic. In 2002, Abdic was sentenced to twenty years in prison by the County Court in Karlovac after he was found guilty of war crimes and crimes against humanity. He sentence was later commuted to 15 years.

After his examination-in chief by the defense of Jadranko Prlic, former Herceg Bosna prime minister, and the cross-examination by the defense counsel of the other two accused, Milivoj Petkovic and Bruno Stojic, it was prosecutor Kenneth Scott’s turn to ask questions. At the beginning of his cross-examination, he confronted the witness with a transcript from his earlier evidence at the Dario Kordic trial. At that time, Akmadzic described Alija Izetbegovic, former president of the BH presidency, as a ‘very good friend’ and an ‘honest politician’. The witness replied that he might have ‘overemphasized a little’ his friendship with Izetbegovic then. Izetbegovic was a ’good man’ but a ’bad politician’, he went on to say.

The cross-examination of the witness will continue next week.