TOLIMIR DENIES RESPONSIBILITY FOR GENOCIDE IN SREBRENICA AND ZEPA

The appellate hearing in the case against Mladic's former assistant for security and intelligence in the VRS Main Staff mostly focused on the issue of whether the VRS operations in Zepa could be qualified as acts of genocide if considered separately from Srebrenica, and whether the Trial Chamber erred when it concluded that the three leading public figures in Zepa were killed with the specific intent to destroy a part of the Muslim community 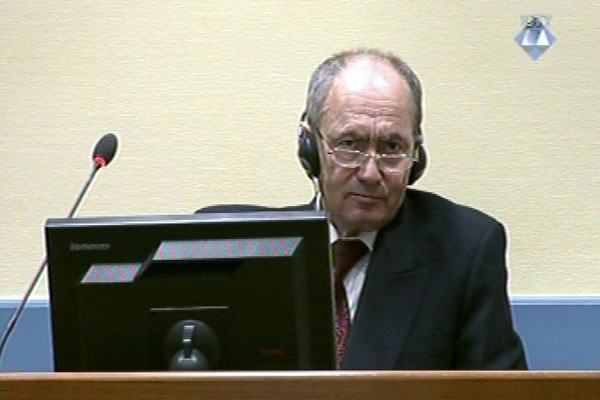 In December 2012, the Trial Chamber found Zdravko Tolimir, Ratko Mladic’s assistant for security and intelligence in the VRS Main Staff, guilty of genocide, complicity in genocide, extermination, murder, persecution and forcible transfer of the population of Srebrenica and Zepa in July 1995. Tolimir was sentenced to life in prison. An oral hearing was held today at the Tribunal on Tolimir’s appeal against the trial judgment.

In his submission, Tolimir stated 25 grounds of appeal contesting the factual and legal findings of the Trial Chamber. During the appellate hearing Tolimir’s legal advisor Aleksandar Gajic mostly replied to the Appeals Chamber’s questions. The appellate judges asked if the VRS operations in Zepa could be qualified as genocidal, if they were considered separately from Srebrenica. Also, the judges asked if the Trial Chamber erred when it concluded that the Muslim community leaders in Zepa – Mehmed Hajric, Amir Imamovic and Avdo Palic – were killed with a specific intent to destroy a part of the Muslim population in Zepa.

In the defense’s view, there was no evidence in the case that the VRS had a genocidal intent in respect of the Zepa population and that genocide was committed. In Zepa there were no prisoners of war and civilians were not killed. The murder of three Muslim leaders – regardless of their positions as members of the wartime presidency – couldn’t be interpreted as an act of genocide, Tolimir’s defense claimed. According to the defense, ‘genocide is not a crime against an individual but against a nation, religious or ethnic group’. All three leaders were killed after the population had left Zepa, the defense stressed. At that time, ‘their importance for the survival of the community was not the same as it was before’.

The judges in the Appeals Chamber were also keen to learn if the parties believed the Trial Chamber erred when it concluded that Tolimir ‘knew’ that his subordinates played part in the joint criminal enterprise and if he ‘intended to take part in it’. Tolimir was the chief of security and intelligence in the Main Staff at the time. In the judgment, the Trial Chamber ruled that it was ‘unimaginable’ that Tolimir – given his position – had noknowledge of his subordinated officers killing Muslim prisoners.

According to the defense, Tolimir didn’t know about any murders because no one had informed him about them. One of the crucial documents is Tolimir’s instruction to organize accommodation for detained Muslims in ‘enclosed locations’ so that they couldn’t be photographed from the ground or air. According to the defense, the document was a forgery. The defense insistedthat the document wasn’t part of an attempt to hide the prisoners who were to be executed. On the contrary, the document spoke about finding ‘adequate accommodation’ for the prisoners. The intercepts were ‘misinterpreted’, and the documents were ‘not translated correctly’, the defense argued. In brief, there is no evidence that Tolimir knew about the killings and that he participated in them. Consequently, Tolimir should be acquitted on all counts in the indictment.

The prosecution’s view on the issues is the exact opposite. Prosecutor Peter Kremers holds that the Zepa issue was inseparable from the Serb military operation in Srebrenica. Also, in the prosecutor’s opinion, the Trial Chamber was correct in its assessment of Tolimir’s role in the operations in Srebrenica and Zepa. The accused was one of the ‘key players in the operation to killthe prisoners’, and later in the efforts to cover up the crimes, the prosecutor stressed.

At the end of the hearing, Tolimir took the opportunity to address the Appeals Chamber. Tolimir said that he found it ‘strange’ that he and other VRS officers were indicted because they had defended Republika Srpska. The constitution dictated it, Tolimir noted. After that Tolimir spoke in detail about NATO’s ‘aggression’ against Republika Srpska and the Federal Republic of Yugoslavia. That, in Tolimir’s words, showed that the international community was ‘biased’ and favored some of the partiesin the conflict.

The presiding judge Theodor Meron concluded the appellate hearing after Tolimir's address, indicating that the appeals judgment would be rendered in due time.