Judge Theodor Meron’s Appeals Chamber will hand down the final judgment in the case against Mladic’s former assistant for security and intelligence in the VRS Main Staff, Tolimir on Wednesday, 8 April 2015. Tolimir was sentenced by the Trial Chamber to life in prison for genocide and other crimes in Srebrenica and Zepa in 1995 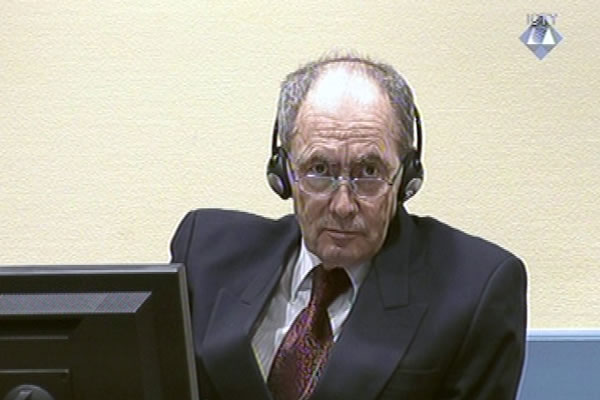 The Appeals Chamber of the International Criminal Tribunal for the former Yugoslavia will hand down the final judgment in the case against Zdravko Tolimir, former Mladic’s assistant for security and intelligence in the VRS Main Staff, on Wednesday, 8 April 2015. In December 2012, the Trial Chamber found Tolimir guilty of genocide, complicity to commit genocide, extermination, murder, persecution and forcible evacuation of the population of Srebrenica and Zepa in July 1995. Tolimir was sentenced to life.

At the appellate hearing in November 2014, the judges heard arguments concerning Tolimir’s appeal. The discussion focused on two issues: first, whether the VRS operation in Zepa could be qualified as genocidal if it were considered separately from the crimes in Srebrenica, and secondly, whether the Trial Chamber erred when it concluded that, given his position, Tolimir had known that his subordinates were part of a joint criminal enterprise which comprised the killings, and whether Tolimir ‘intended to participate in the joint criminal enterprise’.

The defense argued that there was no evidence of the VRS’s genocidal intent against the people of Zepa or that genocide had been committed. The prosecution’s evidence on Tolimir’s involvement in the crimes was ‘falsified’, the defense claimed. Also, according to the defense, intercepted conversations were ‘misinterpreted’ and the documents were ‘mistranslated’. Consequently, the defense called for Tolimir’s acquittal on all counts in the indictment. The position of the prosecution on all those issues was diametrically opposed. According to the prosecution, Tolimir was ‘one of the key players in the operation to kill the prisoners’, and the subsequent efforts to cover up the crimes.

The indictment against Zdravko Tolimir was confirmed and made public in February 2005. In late May 2007, Tolimir was arrested at the border between Serbia and BH. Soon afterwards, Tolimir was transferred to the Tribunal’s Detention Unit. His trial began in February 2010 and was completed in August 2012.