In the final part of the cross-examination of Momir Nikolic, the defense focused on the hand gesture Ratko Mladic made on 13 July 1995 in Konjevic Polje. The gesture indicated, as Nikolic testified, that the Muslims captured after the fall of Srebrenica would be ‘mowed down’, or executed 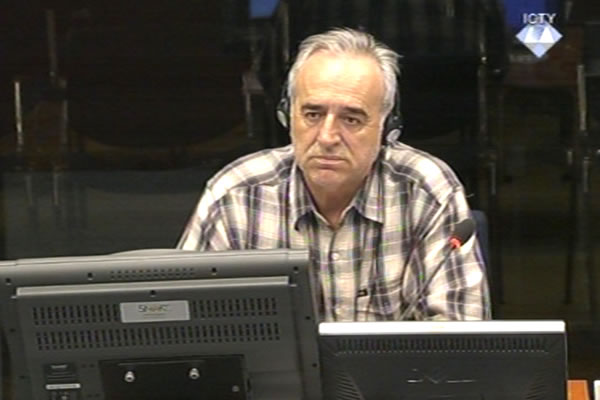 In his evidence at the trial of Ratko Mladic, Momir Nikolic, former chief of security in the VRS Bratunac Brigade, described how on 13 July 1995 Ratko Mladic made a hand gesture indicating, as the witness understood it, that a group of Muslims detained in Konjevic Polje would be executed. In the final part of the witness’s cross-examination, Mladic’s defense counsel Nenad Petrusic tried to contest not only the claim that Mladic had made such a gesture but also that he had met with Nikolic on 13 July 1995 in Konjevic Polje.

After pleading guilty to the crimes in Srebrenica, Momir Nikolic was sentenced to 20 years. Nikolic confirmed that in his plea agreement with the prosecution in May 2003 he didn’t mention Mladic’s hand gesture. The defense counsel then brought up Nikolic’s interviews with the OTP on 28, 29 and 30 May and 12 July 2003, in which he never mentioned that Mladic had moved his hand from left to right across his chest, miming mowing. Nikolic confirmed that he had spoken to the OTP ‘several times’ but didn’t remember if in those interviews he had ever described Mladic’s gesture. Also, Nikolic couldn’t remember when he mentioned the gesture for the first time or why he didn’t do it earlier, primarily in his plea agreement. In Nikolic’s opinion, the agreement was ‘drafted badly’ and the hand gesture was not the only mistake he had to correct later.

In the re-examination, prosecutor Julian Nichols showed the witness a report written by the investigator Bruce Bursik on his interviews with Nikolic on 28, 29 and 30 May 2003. The report states that Nikolic described how Mladic moved his hand from left to right across the chest in response to Nikolic’s question what would happen with the Muslim detainees. When Nikolic’s memory was refreshed, he confirmed that he did demonstrate the gesture Mladic had made in Konjevic Polje to the investigator.

After Nikolic completed his evidence and left the courtroom, presiding judge Orie reprimanded the defense counsel for ‘badgering’ the witness about why he had never mentioned Mladic’s gesture before. As Orie said, the defense counsel was well aware that in fact the description of Mladic’s gesture was mentioned in a report by the OTP investigator who had interviewed Nikolic. Petrusic explained that it was a chain reaction started by his initial mistake when he misstated the date of Nikolic’s interviews with the OTP. The defense counsel stressed that he didn’t intend to mislead either the witness or the judges. The presiding judge concluded that the Trial Chamber would take into account his statement in the course of their consideration of the matter.