BOY FROM EXECUTION SITE IN ORAHOVAC

A young man who was seven years old when he survived an execution in a field in Orahovac near Zvornik on 14 July 1995 gave evidence at the trial of Ratko Mladic. The witness testified with image and voice distortion and under the pseudonym RM 313 to protect his identity 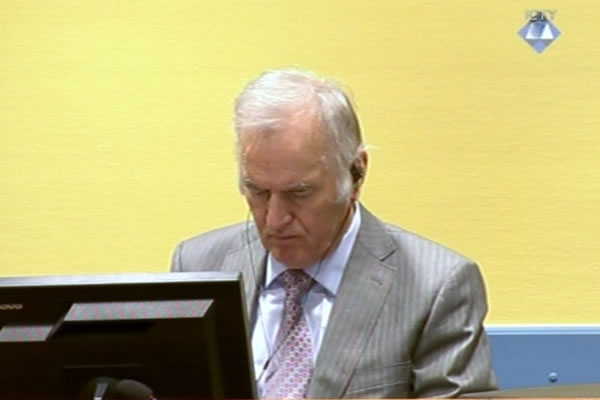 A dramatic story of a boy who was taken from his house together with his father by the Bosnian Serb soldiers three days after the fall of Srebrenica was recounted for the third time before the Tribunal. The boy was blindfolded and taken to an execution site. The Bosnian Serb soldiers fired on the group of prisoners including the boy. He miraculously survived and was taken to the Zvornik hospital where he was treated for gunshot wounds in his arm and leg. Today, the boy testified under the pseudonym RM 313 with image and voice distortion to protect his identity.

Prosecutor Abeer Hasan read out the summary of the witness’s evidence at the trials of the Srebrenica Seven in 2007 and Zdravko Tolimir in 2010. After that, the prosecutor asked the witness a couple of questions about where he was taken to after his stay in the Zvornik hospital and about the impact of these events on his life today.

RM 313 now lives with his uncle’s family who had taken him out of the Zvornik hospital. ‘They asked who would take me. I had nobody else left except my aunt and uncle. They took me in and now I live with them’, the witness explained. ‘A difficult question. I don’t have an answer’, the witness said when he was asked about how his ordeal had affected his life.

The prosecutor told the Trial Chamber that the evidence of this witness was linked with the testimony of witness RM 247, whose statement was admitted into evidence as a deposition. RM 247 drove the van that took the wounded boy from the execution site in Orahovac and to the Zvornik hospital. RM 247 testified at the previous trials for the Srebrenica crimes. As he recounted, the boy ‘emerged from the dead bodies at the execution site’. The witness was barely able to calm down the boy who was ‘all covered in blood and distraught’ and then drove him to the hospital.

As alleged in the indictment against Ratko Mladic, about 1,000 Muslims captured after the fall of Srebrenica and detained in a local school were executed in Orahovac. Mladic is on trial for genocide and other crimes committed during the war in BH.

After witness RM 313 completed his evidence, the OTP investigator Tomasz Blaszczyk returned to the witness stand to continue his evidence. Blaszczyk testified about the video recordings made by Belgrade journalist Zoran Petrovic Pirocanac on 13 and 14 July in the Srebrenica area. The footage was very useful to the OTP in the effort to reconstruct the events in the enclave. Today Blaszczyk spoke about the segment of the video recorded on 13 July 1995 on the road from Konjevic Polje to Bratunac near the village of Sandici. The footage shows the RS police officers calling Bosniaks to surrender. When they did, the police arrested them. After the fall of Srebrenica. The Bosniaks had been trying to reach the territory under the BH Army control through the woods.