The prosecution wants to prove that the findings produced by Karadzic’s ballistic expert Mile Poparic were based on false premises, that he used non-transparent sources and neglected to include relevant information. As a result, he failed to refute the claim that the Bosnian Serb army was responsible for the sniper attacks on civilians in Sarajevo 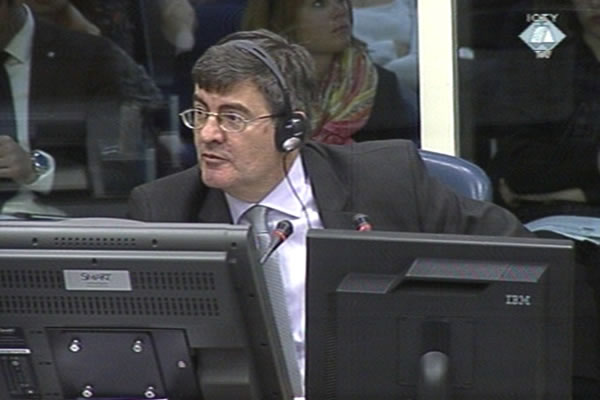 Karadzic’s ballistic expert Mile Poparic said in his report and in his answers to Radovan Karadzic that the responsibility of the Bosnian Serb army was not established beyond reasonable doubt for any of the 17 sniper incidents in which Sarajevo civilians were targeted. Some of the victims were hit by the BH Army, Poparic claimed explicitly. The prosecutor put it to Poparic that his analysis was based on inaccurate information, that his sources were not transparent and that he didn’t disclose in the report all the relevant information he had obtained. As a result, his conclusions were ‘misleading’. The witness retorted that it ‘absolutely isn’t true’. The prosecutor then cross-examined him on the details of his expert analysis.

Prosecutor Edgerton first noted some cases when Poparic misinterpreted witness testimony. Poparic claimed that a witness had stated a BH Army tank was positioned in the area where she was hit. But, as the prosecutor explained, Poparic neglected to mention that the tank was stationed there only seven days, long after the period when the witness was hit by a bullet fired from the Bosnian Serb territory. The expert replied this fact was not relevant at all for his key conclusions. This prompted Judge Kwon to ask the witness a rhetorical question: why mention it at all if it wasn’t relevant? Poparic said that he only wanted to show that the BH Army had positions in the area and that other evidence indicated the VRS troops were not responsible.

In the examination-in-chief, the witness claimed that he had visited all the sites where the victims were at the time when they were wounded or killed. Also, Poparic noted that he visited all the positions from which sniper fire was allegedly opened. He concluded that there was no line of sight from some of the positions to the incident sites. As the prosecutor said today, the witness didn’t visit all the places from which fire had been opened. In fact, he didn’t even visit the key locations, such as the notorious Metalka building and the white skyscrapers in Grbavica. Poparic explained that he had stood ‘next to’ the buildings but didn’t go in for two reasons. First, after so many years there was no evidence of sniper positions, and second, based on other evidence he established that fire had not been opened from those sites.

In the examination-in chief Poparic used photographs he has taken since 2010 in a bid to prove that there was no line of vision to the incident sites from Serb positions. The prosecutor showed Poparic several photos taken in 1996, which clearly show that visibility was much better immediately after the war. Vegetation was scarce and there were fewer new buildings. In some cases, Poparic insisted that visibility wasn’t perfect and at times he expressed doubts that the photos were taken from the positions from which fire was opened according to the prosecution.

Finally, the prosecutor contested the defense expert’s conclusion that in November 1994, seven-year old Nermin Divovic was killed and his mother Dzenana Sokolovic wounded ‘in an exchange of fire’, not by a sniper. Poparic reached his conclusion on the basis of what he was told by the wounded woman: that she heard bursts of gunfire during the incident. The prosecutor showed an UNPROFOR document reporting that the French battalion soldiers fired on the Serb snipers in response. The witness could have heard that, the prosecutor put it to Poparic. Karadzic’s ballistic expert will complete his evidence tomorrow.