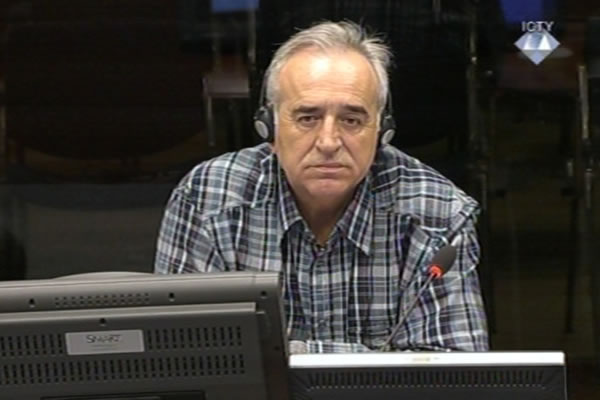 ‘By obeying orders, I took part in a crime’, former security chief in the Bratunac Brigade Momir Nikolic said today at the trial of Ratko Mladic. In 2003, Nikolic pleaded guilty to the crime of persecution in Srebrenica. Nikolic is currently serving his 30-year sentence in a prison in Finland. Today, Nikolic said that he ‘felt terrible’ because of the ‘heinous crime’ and once again apologized to ‘all the victims and their families’.

As Nikolic explained, after he spoke to the security officers from other VRS units he came to realize that the crimes would be perpetrated. After Vujadin Popovic, the security chief in the Drina Corps, told him on 12 July 1995 in Bratunac that ‘all Balijas should be killed’, Nikolic received further confirmation of this on 13 July 1995 when he provided security for General Mladic as he travelled through Konjevic Polje. Mladic addressed a group of detainees and told them ‘you shouldn’t worry, you will be transferred wherever you want to go’. As the witness recounted today, when he asked ‘what will really happen to those people’, Mladic ‘smiled and made a gesture, drawing his hand from left to right across the chest’. Nikolic understood that the gesture meant that the prisoners would be killed.

That same evening on 13 July 1995, Ljubisa Beara, the security chief in the Main Staff, ordered Nikolic to inform Drago Nikolic, the Zvornik brigade security chief, that the detainees from Bratunac would be transferred to the area of responsibility of the Zvornik Brigade. The prisoners would be ‘temporarily detained and then executed’. After completing his task, Nikolic witnessed a quarrel between Beara and Miroslav Deronjic, the president of the Bratunac SDS, later that night. The two fought over where the detained Muslims would be executed. Deronjic wanted the detainees to be transported to the area of responsibility of the Zvornik Brigade. Beara – for reasons unclear to Nikolic – wanted them to remain in Bratunac despite the fact that only a couple of hours earlier he had asked Nikolic to inform the Zvornik brigade security chief about the transfer of prisoners. Both invoked the purported orders from their bosses: Deronjic said he had received his from Karadzic and Beara said his orders had come from Mladic, as they quarreled where – but not if – the captured Muslims would be executed, Nikolic said.

Finally, Momir Nikolic testified that the operation to dig up the original mass graves and transfer the bodies to other locations was thought up by the civilian authorities. The order to use elements of the VRS units in the operation came from the Main Staff. Elements of the Drina Corps, the Zvornik and Bratunac brigades, civilian and military police, the municipal executive bodies and local companies that provided construction machinery and trucks all took part in the operation. The operation was labeled as ‘a hygiene and sanitation’ effort but its goal was, Nikolic claimed, to conceal the evidence of the Srebrenica crimes. The indictment alleges that more than 7,000 men were executed in the area.

Mladic’s defense lawyer Nenad Petrusic cross-examined Nikolic. Petrusic tried to challenge parts of Nikolic’s evidence that supported the prosecution’s case that the VRS wanted to make life in the enclave ‘unbearable’ and thus force the people to leave it by blocking humanitarian convoys and exerting pressure in other ways. Momir Nikolic’s cross-examination continues tomorrow.