VICTIMS OF FIGHTING AND REVENGE

In the cross-examination of the OTP investigator, Ratko Mladic’s defense counsel tried to get the witness to confirm the defense case that the former commander of the VRS Main Staff wasn’t responsible for the genocide in Srebrenica. The Srebrenica genocide is one of the gravest crimes during the war in BH; Mladic has been charged with it 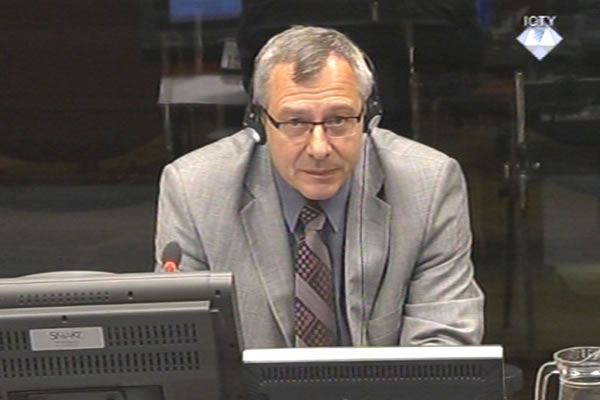 Mladic’s defense counsel Dragan Ivetic put to OTP investigator Tomasz Blaszczyk that the videos made by Belgrade journalist Zoran Petrovic Pirocanac on 13 and 14 July 1995 contain exculpatory evidence, not just the information about crime scenes and the participants in the events after the fall of Srebrenica. It is the defense case that most of the victims were in fact killed in the ‘heavy fighting’ after the Republika Srpska army entered Srebrenica, and not, as the prosecution alleges, in the executions that followed.

The defense counsel showed a part of Petrovic’s video taken en route from Bratunac to Konjevic Polje. The footage shows the surrender of the Bosniaks in the column that was moving towards Tuzla through the woods; ‘gunfire and explosions’ could be heard from the direction they were coming from. Bursts of gunfire and detonations clearly indicate there was fighting going on at the time in the woods, the defense counsel argued. To corroborate his claim, the defense counsel showed the transcript of the conversations heard in Zoran Petrovic Pirocanac’s video footage. A soldier from the Bratunac Brigade describes how during his two-week shift manning a position on the front he was involved in ‘heavy fighting’ with the Muslim forces and that a large number of BH Army soldiers were killed in the clashes.

The OTP investigator agreed that there had been fighting, but he dismissed the defense’s suggestion that thousands of Bosniaks pushing towards Tuzla in a column could have died in combat. The investigation showed that the bodies found in the woods belonged to the people from the column who had probably been killed in combat, but there were just a few hundred of them.

Mladic’s defense put it to Blaszczyk that local Serbs from the Srebrenica area participated in the revenge killings. From the beginning of the conflict in 1992, there were Serb victims, the defense counsel noted. Blaszczyk agreed that the ‘crimes were committed on both sides’ and that there were certainly cases of revenge. Nevertheless, Blaszczyk stressed that the Bosniaks were detained by the Bosnian Serb army and police and not by individuals bent on revenge.

Finally, the defense brought up the investigator’s evidence that only police forces, not the RS army, were deployed on 13 July 1995 in Kravica, when about 1,000 prisoners were killed in the farm warehouse. The defense counsel put it to the witness that the police in fact committed the crimes Mladic is charged with in his capacity as the supreme military commander. Blaszczyk agreed that the police units were deployed in Kravica. But those units participated in Operation Krivaja 95 under the military command on the orders of the interior minister Tomislav Kovac, Blaszczyk recalled.