Tomasz Blaszczyk, a police officer from Poland, described at the trial of Ratko Mladic how videos made by Belgrade journalist Zoran Petrovic Pirocanac helped him and other OTP investigators to reconstruct the crimes in Srebrenica. Pirocanac recorded the footage in the field on 13 and 14 July 1995 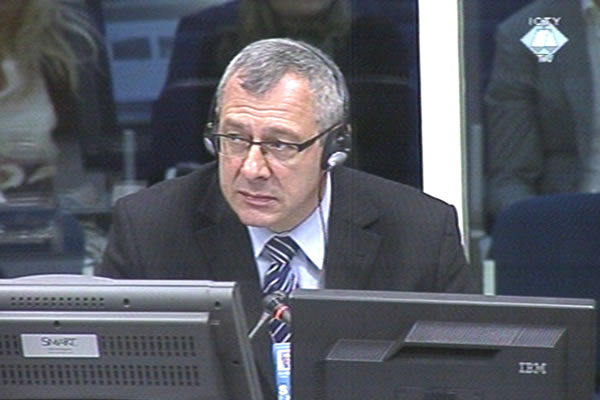 OTP investigator Tomasz Blaszczyk described at the trial of Ratko Mladic his role in the reconstruction of the events in Srebrenica in July 1995. In 2006 and 2007, Blaszczyk and Zoran Lesic, a photo and video technician working for the OTP, identified the places, people and events recorded in the video tape made by Belgrade journalist Zoran Petrovic Pirocanac. The prosecution put together a photo album and has been using it to prove the Srebrenica genocide.

The videos taken on 13 and 14 July 1995 were admitted into evidence at all previous Srebrenica trials as prosecution exhibits. Pirocanac did a favor to the prosecution, and landed in trouble the Bosnian Serb military and police officers whose participation in the operation he had wanted to record for posterity. Pirocanac did delete some incriminating parts from the raw footage he delivered to the OTP in 2006. The deleted footage showed prisoners in the so-called White House in Potocari and a pile of bodies in front of the farm warehouse in Kravica. Because some of the missing footage was broadcast by the Belgrade TV network Studio B on 17 July 1995, Blaszczyk was able to ‘fill in the blanks’ and complete Pirocanac’s material.

Following the trail of the footage, the testimony of those involved in the events and various military documents, the prosecution was able to identify the military and police units that had participated in the capture of the Muslim men and boys who were killed at that time. The key element was the reconstruction of the movements of the man who commanded all the police units in the Srebrenica operation, Ljubomir Borovcanin. Borovcanin was Pirocanac’s guide. Many other Serb officers and soldiers were also identified as they were video taped en route between Konjevic Polje, Srebrenica, Potocari, Bratunac and Kravica.

The footage shows the able-bodied men being separated from other civilians and the capture of the men who were trying to flee through the woods. Some of the sites where Muslims were detained – such as the White House and the field in Sandici – are also seen. Muslim were later taken away from those locations to Bratunac and then to the execution sites where they were killed.

The video taken in the afternoon of 13 July 1995 shows a member of the Jahorina police unit on the road near Sandici calling out to the Muslim fugitives to surrender. When Pirocanac asked him how many had already surrendered, the man said, ‘three to four thousand’. This, according to Blaszczyk, corresponds to the prosecution’s estimate of the number of persons captured until that moment.

Tomasz Blaszczyk will continue his testimony on 14 June 2013 because of the prosecution’s busy schedule at Ratko Mladic’s trial. The accused was on his best behavior for the most part of the hearing today, but toward the end, the public in the gallery could hear Mladic complain about the restrictions ordered by the Trial Chamber after he had behaved inappropriately during witness testimony. Mladic apparently said he didn’t like the fact that he was ‘not allowed to speak, shake my head and wink’. Mladic also complimented one of the ladies present in court. He also told prosecutor McCloskey ‘not to make a fool of himself’ and to ‘withdraw the indictment against me as soon as possible'.