In his Directive 7, the VRS supreme commander ordered his troops to create ‘the situation of total insecurity with no hope of further survival or life for the inhabitants of Srebrenica and Zepa’. According to prosecution witness Mirko Trivic, Directive 7 was supposed to be a ‘a sort of a sanction’ that would cause the Muslim population in the enclave to rebel and overthrow the regime that held them ‘hostage’ 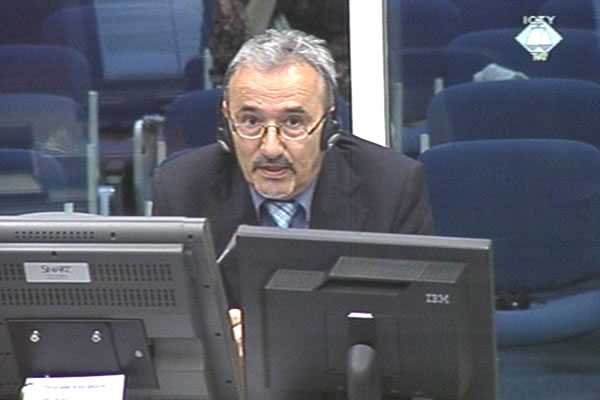 In March 1995, Radovan Karadzic, as the commander-in-chief of the Republika Srpska armed force, signed Directive 7, ordering his troops to create ‘the situation of total insecurity with no hope of further survival and life for the inhabitants of Srebrenica and Zepa by ‘planned and well-thought combat operations’. The document, which was the focus of debate at all the Srebrenica trials, was today given an unusual interpretation at the trial of Ratko Mladic.

According to the prosecution witness Mirko Trivic, former commander of the VRS 2nd Romanija Brigade, Directive 7 was in fact a ‘sanction of a sort’ against the Muslim population in the enclaves. The Directive’s goal was to help the Muslims realize that ‘their own leadership held them hostage’ and to ‘urge them to call for their dismissal’. In July 1995, Trivic commanded one of the units involved in the operation to take Srebrenica and Zepa. As the prosecution alleges, the operations ended with the execution of more than 7,000 and the expulsion of about 25,000 inhabitants from both enclaves.

After Judge Orie joined in the questioning, Trivic interpreted the Directive as a ‘sanction’ whose aim was to ‘change the regime’. Judge Orie followed up on Trivic’s reply that the Drina Corps had decided independently how to implement the guidelines from Karadzic’s Directive. The judge asked what leeway the Drina Corps had in deciding how to implement the guideline to ‘create unbearable conditions for the life of the population in the enclaves by planned and well-thought combat operations’.

According to Trivic, the Corps command obviously thought that separating Srebrenica from Zepa and reducing the enclaves’ size would put the population under pressure. It should ‘make them aware’ that they were hostages of their own leadership and that they should rebel and demand changes, the witness explained. This was similar to the terminology used by the states that want to change the regimes in other parts of the globe, which impose sanctions in order to achieve this end, Trivic continued. ‘These are sanctions, but phrased differently’, Trivic concluded. The presiding judge decided not to ask any further questions, but noted that it was difficult to see how the meaning the witness attributed to the document could be derived from its contents.

Ratko Mladic’s trial continued with the evidence of a protected witness testifying under the pseudonym RM 306. As he was cautioned that he had the right not to answer any potentially incriminating questions, the witness is probably one of the insiders from the RS military or civilian authorities.