The defense has asked the Appeals Chamber to acquit General Vladimir Lazarevic of aiding and abetting the expulsion of Kosovo Albanians. Invoking Momcilo Perisic’s case, the defense insisted there was no evidence that Lazarevic’s acts were ‘specifically directed’ at the commission of crimes. In his response, the prosecutor insisted that the findings in Perisic’s judgment should be rejected. Perisic’s appeal judgment diverges from the Tribunal’s jurisprudence, ‘undermines the respect of international law’ and is ‘contrary to the interests of justice’, the prosecutor argued 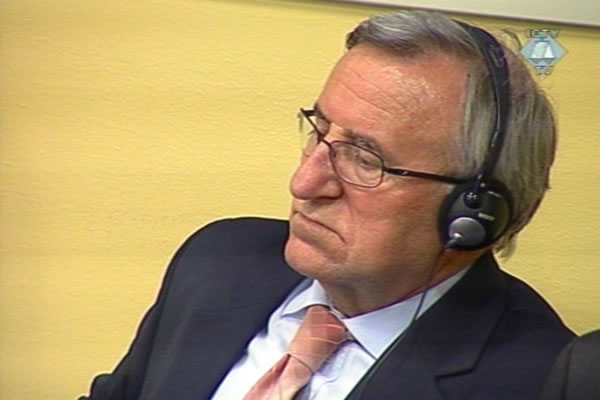 Vladimir Lazarevic in the courtroom

On the third day of the appellate hearing in the case against the four former Serbian officials charged with the crimes in Kosovo, the prosecution urged the Appeals Chamber, with Chinese judge Liu presiding, to ignore the findings related to the ‘specific direction’ of the assistance to the commission of the crimes as a prerequisite for the conviction for aiding and abetting. This plea was made in uncharacteristically strong terms. In his very strongly termed argument, prosecutor Marcussen listed four ‘convincing reasons’ why any future judgment should reject this finding of the Appeals Chamber in Perisic’s case, which was presided by the US judge Meron.

Firstly, Perisic’s appeal judgment adopted a new criterion, the ‘specific direction’, that had not existed in the international case law. Secondly, the current jurisprudence of the Appeals Chamber -was misinterpreted. Thirdly, the ‘ill-defined concepts’ were introduced, leading to the difficulties in the application of the law. Fourthly, the findings in the judgment ‘undermine the respect of the international humanitarian law’ and ‘are contrary to the interest of justice’. In other words, the prosecution wants this Appeals Chamber, and all the other appellate and trial chambers, to treat the findings about the ‘specific direction’ as an incident that diverges from the current rules and to refrain from applying it in the future.

Vladimir Lazarevic’s defense gave the prosecution an opportunity to deal with the Perisic’s acquittal of the charges of aiding and abetting crimes in BH and Croatia at the appellate hearing for the Kosovo crimes. The former commander of the VJ Pristina Corps was sentenced to 15 years for aiding and abetting the joint criminal enterprise aimed at expelling the Albanian population from Kosovo in 1999. Lazarevic’s defense contends that, if the findings in the Perisic judgment are applied to Lazarevic’s case, he should be acquitted too. According to the defense, there is no evidence that the orders Lazarevic issued to his subordinate units were ‘specifically directed’ to the commission of crimes. Consequently, he was not providing assistance to the actual perpetrators.

The defense lawyers are convinced that Lazarevic too will ‘live to see justice done’. The fact that Lazarevic ‘merely provided assistance’ to the subordinated units does not mean he is responsible for their crimes. Also, the defense contends that the Albanian population fled in fear of the NATO strikes and of the clashes between the Serbian army and police and the KLA. The people were not forced to flee by the terror campaign of the joint Serbian security forces against civilians.

Lazarevic’s defense presented its arguments this Wednesday. The defense teams representing Nikola Sainovic and Nebojsa Pavkovic had their day in court earlier this week. The defense of police general Sreten Lukic will deliver its argument on Thursday.