Former Chief of the VJ General Staff was first sentenced to 15 years in prison, and then accepted the findings in the judgment in order to get the prosecution to drop its appeal. He was then granted early release by President Meron, only to repudiate his earlier acceptance of his guilt as soon as he arrived in Belgrade 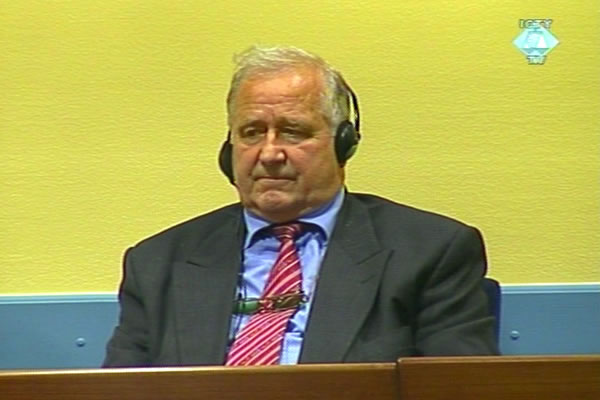 Dragoljub Ojdanic in the courtroom

General Dragoljub Ojdanic, one of Slobodan Milosevic’s minions, never did show too much initiative, keeping his head down and doing his job, although he was found guilty of being part of the killing machinery in Kosovo in 1999, by dint of his office: he was the Chief of the VJ General Staff. He showed the same attitude when he came to The Hague. The only memorable thing he did was to demand at a status conference that the meals in the UN Detention Unit be adapted to ‘the culinary culture in our country’.

And yet this Dragoljub Ojdanic managed to hoodwink the Tribunal and its president, Theodor Meron. Although he was found guilty of complicity in the murder of thousands of Albanian civilians and the expulsion of hundreds of thousands from Kosovo, he served barely over 11 years.

In 2009, Ojdanic was sentenced to 15 years in prison for aiding the joint criminal enterprise whose goal was to expel the Albanians from Kosovo. Ojdanic and the prosecution appealed the judgment, but in January, Ojdanic wrote a short letter notifying the Tribunal that he ‘fullyaccept[s] the findings in the judgment’ and ‘feel[s] sorry for all those who suffered as a result of the actions [he] was convicted of’. He dropped his appeal.

The prosecution bought his claims and decided to withdraw its appeal in which it had sought a more severe sentence. The next person to buy it was President Meron, who decided to grant Ojdanic early release after he had served two thirds of his sentence. In the statement of reasons, Meron said that granting release to prisoners after they had served two thirds of their sentence was the set practice at the Tribunal, and devoted a section of the decision to the factors that favor early release: positive ‘indicia of rehabilitation’, to be found primarily in the letter in which Ojdanic purportedly admitted his guilt and expressed his regret over the suffering of the victims.

Just how sincere his remorse was could be seen as soon as Ojdanic landed at Belgrade airport. Amid the cheers and singing, he said he was coming home ‘with my conscience clear and undisturbed’ because he had done nothing ‘that would constitute a crime, let alone a war crime’. This contradicts his statements in the written admission of guilt that were obviously taken at face value by the Tribunal’s president.

The President’s decision did state some facts that militated against Ojdanic’s early release: his failure to cooperate with the prosecution and the extreme gravity of the crimes he was convicted of. But these reasons were apparently not strong enough in the President’s view and the ‘indicia of rehabilitation’ prevailed, only for Ojdanic to discard them post-haste as soon as he was released.

Dragoljub Ojdanic is not the first convicted war criminal to ridicule the Tribunal, after profiting from the admission of guilt. Biljana Plavsic was the most glaring example: she pleaded guilty to crimes against non-Serbs in BH, only to change her tune as soon as she started serving her sentence. She claimed she was innocent, that her admission of guilt was not sincere but merely a means to get a milder sentence. Her shenanigans did not happen so far back that they were forgotten, but obviously no one learned anything from it. Or perhaps, no one wanted to learn anything.