On the second day of the appellate hearing, US lawyer John Ackermann said it was ‘absurd’ to think that ‘intelligent and educated’ people like Slobodan Milosevic, Nebojsa Pavkovic and other Serbian and FRY officials would believe it was possible to expel thousands of Albanians from Kosovo and obtain international support for that. The prosecutor responded by saying it was this group of people that conceived and implemented the criminal plan to ethnically cleanse the province 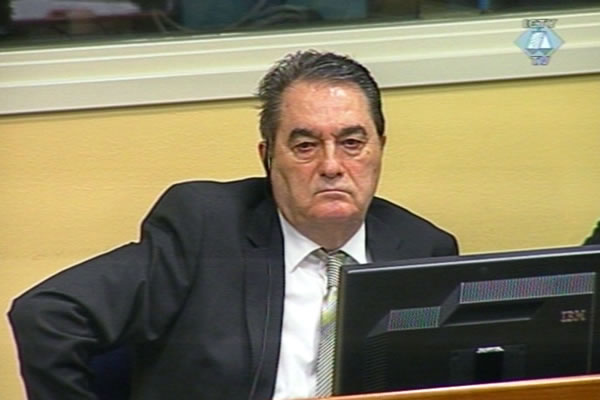 Nebojsa Pavkovic in the courtroom

The defense counsel of Nebojsa Pavkovic, former commander of the VJ 3rd Army, contends that his client was unfairly sentenced to 22 years for crimes against Kosovo Albanians. According to the defense counsel, the sentence was ‘in fact politically motivated’ and the Appeals Chamber should right the wrong and acquit the accused. The trial judgment found that Pavkovic, Nikola Sainovic and Sreten Lukic were all members of the joint criminal enterprise headed by Slobodan Milosevic and aimed at achieving the ethnic cleansing of Kosovo in 1999.

According to Pavkovic’s defense counsel Ackermann, it is ‘absurd’ to even think that a group of such ‘intelligent and educated people’ would believe that they could expel thousands of Albanians and obtain international support for it.

Insisting on Pavkovic’s commitment to preventing the crimes, the defense referred to the 13 orders Pavkovic issued before the NATO air strikes and 26 orders he issued during the air campaign. In the orders, Pavkovic urged his subordinates to observe the provisions of the international laws of war. According to the defense counsel’s calculations, Pavkovic issued orders on the average ‘every three days’ and one couldn’t say that Pavkovic intended to deploy the units with a view to implementing a criminal design. ‘I would be surprised to see that any senior military commander in a recent international conflict issued more orders of that kind than Pavkovic’, the defense counsel argued.

In response to Ackermann’s documents, the prosecutor showed other documents, including a table with the extracts from military reports, orders and minutes of the meetings. The prosecutor’s documents showed that in 1998 and 1999, General Pavkovic was very much aware of the crimes committed by the army and police against Kosovo Albanians but didn’t do anything about them. In fact, Pavkovic did everything to cover up the crimes, and made sure that the superior command never learned about them. At the same time, Pavkovic churned out what the prosecutor called ‘symbolic’ orders prohibiting crimes he knew would never be implemented.

The prosecution highlighted in particular two documents from May 1999. In the first, Pavkovic orders his subordinated units to ‘establish control over the territory and movement of the civilian Shiptar population’. The other document is a report sent to Pavkovic informing him that about 10,000 Albanian civilians were expelled in the fighting around Pec. This is where the core of the objective of the joint criminal enterprise was present , the prosecutor argued: to expel civilians and to establish control over the territory.

Concluding its reply to the defense, the prosecution once more emphasized Pavkovic’s role as Slobodan Milosevic’ confidant and his key military ‘player’ in the field. According to the prosecution, Pavkovic prepared the troops and armed the Serb civilians with a view to implementing the criminal design. When Pavkovic’s units started killing, raping, looting and destroying property, Pavkovic created an atmosphere of impunity, facilitating the expulsion of more than 700,000 civilians from Kosovo. The prosecution consequently urged the appellate judges to dismiss the defense’s request for Pavkovic’s acquittal and to impose a harsher sentence than the 22 years in prison Pavkovic received from the Trial Chamber.

Pavkovic’s defense counsel spoke last at the hearing today, noting that mistakes were made in wars, comparing Kosovo to Afghanistan. In Afghanistan, US soldiers find it hard to distinguish soldiers from civilians; this results in casualties among the civilians. The defense counsel hoped he was leaving his client ‘in good hands’, urging the Appeals Chamber to dismiss the erroneous findings from the trial judgment.