PROSECUTION ASKS FOR LIFE FOR THE KOSOVO FOUR

According to the prosecution, the sentences imposed by the Trial Chamber on the former Serbian officials – 22 and 15 years in prison – don’t reflect the gravity of the crimes and the role played by the accused. The prosecution has asked for the ‘severest sentence provided by the Statute’. The defense lawyers argued that the request was ‘impermissible, unethical and non-collegial’. The accused had an opportunity to address the judges. General Lazarevic’s thanked them in seven languages 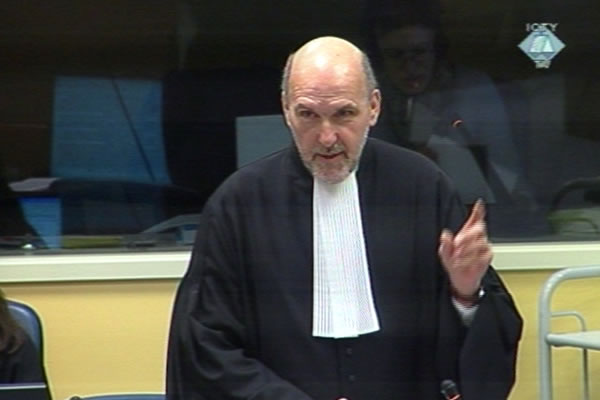 Peter Kremer, prosecutor at the Tribunal

On the last day of the appellate hearing in the case against the former Serbian officials, the prosecutor explained why in his view the four accused should receive harsher sentences. Former deputy prime minister in the federal government Nikola Sainovic and generals Nebojsa Pavkovic and Sreten Lukic were sentenced to 22 years in prison for their part in the joint criminal enterprise aimed at ethnic cleansing of the Kosovo. Vladimir Lazarevic got 15 years in prison for his role in aiding the joint criminal enterprise.

The prosecution contends that the sentences don’t reflect the gravity of the crimes and the significant roles the accused played in them. The prosecution therefore urged the Appeals Chamber, with Chinese judge Liu presiding, to render the ‘severest sentence provided by the Tribunal’s Statute’: life imprisonment. Prosecutor Kremer recalled that the joint criminal enterprise resulted in the expulsion of more than 700,000 persons as a consequence of the terror campaign of murder, abuse, rape, looting and destruction. He used the activities of the Serbian army and police in Pristina as an example to illustrate his point. In late March 1999, the evictions of Albanians began, from house to house. The Albanians were then taken to the railway station and were put on trains leaving for Macedonia. As for the crimes in smaller towns, the prosecutor reminded the judges of the findings in the judgment related to the mass murders in the villages around Orahovac, such as Mala Krusa, where more than 100 men were first executed then burned. More than 50 civilians were killed in Bela Crkva.

The defense teams of the four accused reacted strongly to the prosecution’s demand for harsher sentences; as they said, it was ‘impermissible, unethical and non-collegial’. According to the defense, the Trial Chamber had heeded the prosecution’s request for a sentence of ‘at least 20 years in prison’.The defense lawyers argued that the prosecutors should content themselves with that, and not ask the Appeals Chamber to ‘save them from themselves’. Sainovic’s defense counsel Toma Fila noted that the prosecution had asked for harsher sentence for the four convicted men, and yet had not appealed against the acquittal of the former Serbian president Milan Milutinovic. Also, Fila said, the prosecution withdrew its appeal against the 15-year sentence of the former Chief of the VJ General Staff Dragoljub Ojdanic after he had pleaded guilty for the Kosovo crimes in recent past.

The four accused addressed the Appeals Chamber then. Sainovic was the first to speak: he said that he didn’t want to evade his responsibility, but he felt he was convicted on the basis of the findings about the function of the political coordinator of the army and the police: the function he didn’t perform. At the time, Sainovic noted, he was just an ordinary federal official. Sainovic claimed he felt sorry for all the victims; ‘I will suffer because of that for as long as I live’. Generals Pavkovic and Lazarevic in their statements blamed the crimes on the NATO ‘aggressor’ and the ‘terrorist and separatist’ KLA. The generals claimed that more than 500 civilians were killed by the air strikes in Kosovo and that the ‘terrorists’ used the population as human shields. Police general Lukic claimed that he didn’t have authority over the police units in the province: generals Obrad Stevanovic and Vlastimir Djordjevic did. Lukic was never close with Stevanovic and Djordjevic and was not close to Slobodan Milosevic and interior minister Vlajko Stoiljkovic. Lukic therefore expected the appellate judges to ‘right the wrong’ and acquit him.

All the accused thanked the Appeals Chamber at the end of the hearing, but General Lazarevic outdid them all, because he thanked the judges in seven languages: first in Serbian, then he switched to the Tribunal’s official languages and the languages of the judges in the Appeals Chamber:English, French, Chinese, Italian, Russian and Turkish. Presiding judge Liu contented himself with declaring the hearing closed, and indicating that the appeals judgment would be rendered ‘in due course’.