In the year and a half of its case, the prosecution called 126 witnesses. The accused Zdravko Tolimir will respond to the prosecution evidence by calling only four witnesses. The examination-in chief of Tolimir’s witnesses will take 36 hours, or 9 court days. As his first witness, Tolimir called a former officer who served in the Department for Civil Affairs and Cooperation with International Organizations in the VRS Main Staff, in a bid to prove ‘that UNPROFOR was biased and spied for the Muslim and Croatian forces’ 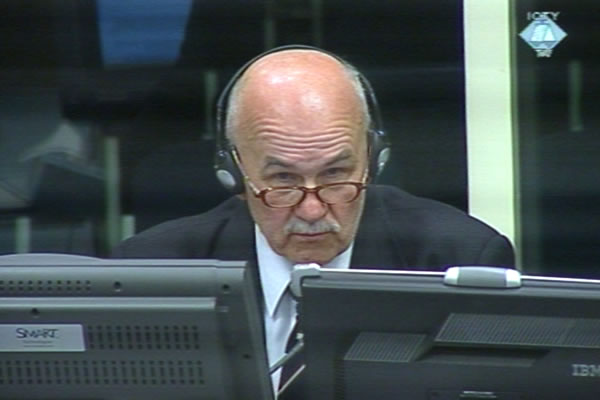 Zdravko Tolimir, Mladic’s former assistant for security and intelligence in the VRS Main Staff, today called his first defense witness. As indicated, Tolimir’s case will be completed in just one month. Tolimir is on trial for genocide and other crimes in Srebrenica and Zepa in 1995.

Slavko Kralj, former staff officer in the VRS Main Staff, is the first of Tolimir’s four defense witnesses. In November 1994, Kralj was appointed to the Department for Civil Affairs and Cooperation with International Organizations, and was in charge of maintaining correspondence with the representatives of the international organizations, and served as an interpreter at various meetings in that period.

The defense asked to be given 12 hours for the examination-in chief of Colonel Kralj, who confirmed that he had been there when Tolimir negotiated with UNPROFOR and other international organizations. Negotiations primarily dealt with the freedom of movement of UN staff and the passage of convoys bringing relief supplies for the inhabitants of the protected zones of Srebrenica, Zepa and Gorazde.

Tolimir, who represents himself, showed the witness several reports from the meetings of the Central Joint Commission; the Commission comprised representatives of the Serb and ‘Muslim-Croatian forces’ and was chaired by UNPROFOR. Colonel Kralj, who had been a military observer in the UN mission in Iran in 1989 and 1990, confirmed Tolimir’s claims about UNPROFOR’s bias towards the ‘enemy side’. As Kralj recounted, the UN personnel in BH, compared to the mission in Iran, had almost unlimited freedom of movement which they often abused.

Instead of reporting the real situation in the field, UNPROFOR was involved in ‘either providing supplies or feeding information to the Muslim-Croatian side about the VRS positions and other intelligence’, the witness claimed. UNHCR humanitarian aid convoys were often used for ‘espionage and smuggling’. Because they were engaged in ‘reconnaissance and intelligence-gathering activities’, the convoys were prohibited from passing through the VRS territory, the witness agreed with Tolimir when he put this claim to him.

Tolimir is trying to contest the prosecution case that the VRS restricted the freedom of movement of UNPROFOR and humanitarian convoys heading into the enclaves to hinder the implementation of the UN peace-keeping force’s mandate and to make the lives of the Muslims in the protected zones impossible.