According to Ratko Skrbic’s calculations, after the fall of the enclave in July 1995, there was a ‘deficit of 368 persons who had gone missing, or had been killed or executed’. This makes the prosecution’s allegation about more than 7,000 victims of the Srebrenica genocide untenable, Skrbic contends. Ratko Skrbic has been called to testify as an expert witness by General Zdravko Tolimir. He wrote a book entitled Srebrenica – Genocide against Truth 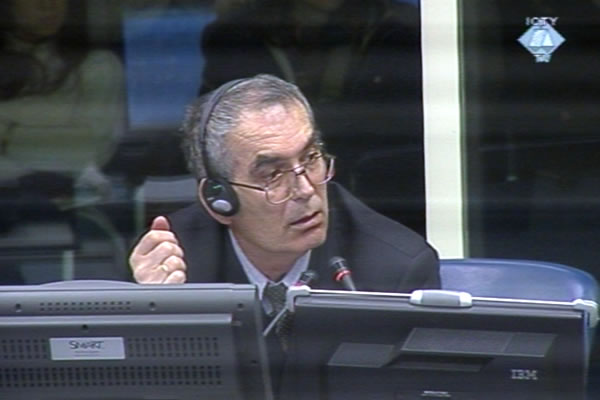 In July and August 1995, the BH Army 28th Division did not lose thousands of soldiers, concluded former VRS colonel Ratko Skrbic in the first of the two expert reports he wrote for Zdravko Tolimir’s defense. According to Skrbic, this means that ‘the prosecution’s allegation about 7,000 Muslims killed there is untenable’ and that the genocide charges against Tolimir ‘cannot be reliably proved’.

As Skrbic recounted, he started investigating Srebrenica in 2005 when he joined the investigation team working for Radivoj Miletic’s defense. Miletic, former operations officer in the VRS Main Staff, has been sentenced by the Tribunal to 19 years for crimes in Srebrenica. Skrbic’s conclusions based on the years he had spent investigating the ‘Srebrenica phenomenon’ were put into his expert reports, entitled the Movements of the Population in Srebrenica and Srebrenica and Zepa.

Skrbic explained that he based his first report on the documents from the BH Army, local authorities in Srebrenica, the UN – from UNPROFOR reports to the reports of the UN Secretary General – and various international organizations such as the UNHCR and the ICRC. In his first report, Skrbic concluded there were ‘hundreds, rather than thousands of victims in Srebrenica’.

Skrbic compared the population figures for January 1994 from the local authorities in Srebrenica with the data obtained by the municipal Civil Defense committee a year later and finally with the information the Dutch Battalion had about the number of people living in Srebrenica in July 1995 before the fall of the enclave. Skrbic claims he arrived at reliable figures showing that the number of people in the enclave had actually decreased in that period. Skrbic, attributes the fall to the fact that the civilians ‘voluntarily left’ the enclave and the 28th Division soldiers ‘deserted the ranks’,mostly because they feared the fierce fighting they had no desire to take part in.

Skrbic’s starting point is the fact that after Mladic’s troops overran the UN- protected enclave, 35.632 refugees from Srebrenica were registered in Tuzla. Skrbic then subtracted from that figure the 25,000 civilians ‘evacuated from the enclave’ on 12 and 13 July 1995, according to the UN sources. Skrbic thus got the figure of 10,632 men of military age that ‘reached Tuzla alive’, according to his calculations. To that number, Skrbic added the 1,000 Srebrenica men who fled via Zepa to Serbia and 5,000 soldiers of the 28th Division who crossed into the free territory and immediately joined the BH Army 2nd Corps to fight the Serb forces, as the BH Army commander Rasim Delic reported. When all this is added up and subtracted from the number of 42,000 persons who were living, according to the UN, in Srebrenica before Mladic’s troops arrived, there was ‘a deficit of 368 persons who had gone missing somewhere’, Skrbic concluded. Tolimir’s defense expert repeated today that arithmetic was ‘implacable’.

It will be interesting to see how Skrbic will respond in the cross-examination to the prosecution case, presented through the evidence of its demography and military experts, and to the forensic evidence about more than 6,000 victims exhumed and identified since July 1995.