GENERAL WITH NO ONE TO COMMAND

Through his second witness, Zdravko Tolimir is trying to prove that as assistant commander in the VRS Main Staff he was not authorized to issue orders. Tolimir contends that he cannot be responsible for genocide and other crimes in Srebrenica and Zepa in July 1995, charges he is facing at his trial 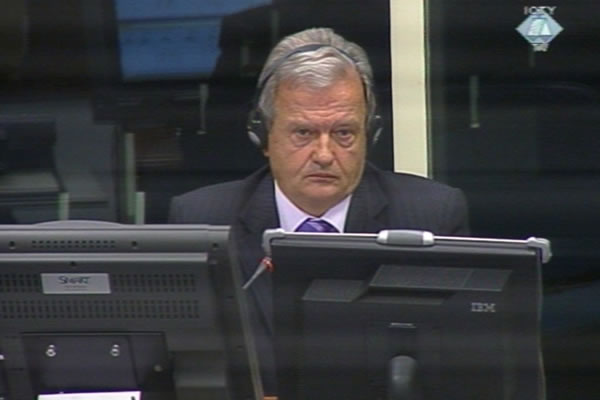 Retired general Petar Skrbic, the second defense witness called by Zdravko Tolimir, began his military career in the JNA. In 1993, Skrbic joined the VRS and in early 1997 returned to the Yugoslav Army, as it was restyled, and finally retired. Skrbic served for about two and a half years with the accused general in the VRS Main Staff, from July 1994 to the end of 1996. Both Tolimir and Skrbic were Mladic’s assistants, Tolimir for intelligence and security and Skrbic for organization, mobilization and personnel.

Because of his experience as a teacher at the Superior Military school in Belgrade and the post he held in the VRS Main Staff, Skrbic was ideally placed to describe the structure and the composition of the VRS Main Staff, Tolimir explained. In particular, Skrbic could speak about the relations between various organizational units in the VRS chain of command.

Skrbic confirmed the oft-aired defense argument that Mladic, as the commander of the VRS Main Staff, was the only one authorized to issue orders; his assistants were in charge of ‘control’, not command. A good part of the hearing today was spent discussing how to translate the terms used by the witness, as they both translate as ‘control’ in English. According to the witness, the service manual for the assistants commanders, including Tolimir, state that they couldn’t issue orders. Assistants could only submit proposals to their commander and issue instructions and guidelines to their subordinates.

As the hearing today drew to a close, Skrbic was asked by the accused to confirm that he had written a telegram on 12 July 1995 to the RS Ministry of Defense asking for ‘urgent requisition of 50 buses’ for the army. Skrbic was ordered to write a telegram to that effect over the phone but was unable to recall who gave it. When the presiding judge asked the witness if he thought that General Mladic had issued the order, the witness agreed.

The prosecution alleges that the buses were used to deport the women and children from Potocari, an operation that began on 12 July 1995, and to transport the captured men who were later executed. Tolimir will continue the examination-in chief of his second witness tomorrow.