DEFENSE EXPERT: 3,000 BH ARMY SOLDIERS WERE KILLED IN THE ATTEMPT TO BREAK THROUGH TO TUZLA 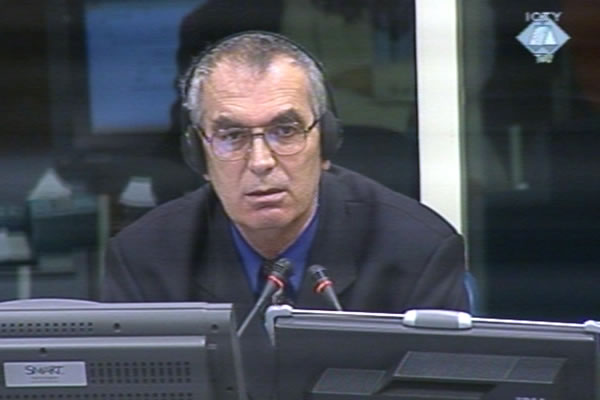 The VRS attacks and ambushes set along the route taken by the BH Army 28th Division soldiers heading towards Tuzla through the woods were legitimate, said former VRS officer Ratko Skrbic, expert witness called by Zdravko Tolimir’s defense. About 3,000 fighters were killed as they tried to break through the VRS lines, Tolimir’s expert contends. In his reports, Movements of the Population in Srebrenica and Srebrenica and Zepa, Skrbic used only ‘non-Serb’ sources, as he said.

The expert based his analysis of the events during the 28th Division’s breakthrough mostly on the stories told by the witnesses, survivors from the column who managed to reach the territory under the BH Army control. Today Tolimir showed video recordings of some of their statements. Skrbic confirmed that this was how he reached the figure of ‘two to three thousand soldiers killed in combat during the breakthrough’, and learned of the instances when those in the column killed each other or committed suicide. Although Skrbic final figure was approximately 3,000 men killed in combat, he did note that ‘it is very difficult to conclude how many people from the column were killed and how many of them had been executed’ because ‘there simply are no data about it at all’.

At the end of the examination-in chief Tolimir showed his expert a book by Philip Corwin, Massacre in Srebrenica, Evidence, Context, Politics, in which the author, former head of the civil affairs in the UNPROFOR headquarters in Sarajevo, argues in favor of ‘a more balanced approach to presenting what really happened in Srebrenica and BH as a whole’. Skrbic didn’t use the book in his analysis but attended the book launch in Belgrade last year. Skrbic thinks that the author’s views corroborate his report and confirm the accuracy of his methodology.

Tolimir revisited the mathematical aspect of the witness’s expert report quoting Jonathan Rupert, former BBC reporter, who wrote in an article that the number of 8,000 persons missing persons after the fall of Srebrenica ‘was always equated with the number of those who were killed’. As these two figures cannot be the same, the British reporter concludes that ‘something obviously is wrong with the maths’. Skrbic believes that Rupert in effect corroborated his calculations and the conclusion that there were hundreds, rather than thousands of victims in Srebrenica.

Finally, based on the correspondence between the BH General Staff, the Presidency and the commander of the 285th Brigade, Avdo Palic, the witness claims that the Zepa Brigade was ready to surrender in order to ensure that its soldiers would be exchanged according to the “all-for-all” principle, in line with the agreement of 24 July 1995. However, commander Palic didn’t have President Izetbegovic’s permission to proceed. The BH president wanted the people to be evacuated from Zepa while the soldiers continued to fight the VRS until the Zepa Brigade could link up with the 2nd Corps. The BH military and political leadership organized the exodus from the enclave with the knowledge and support of UNPROFOR.

As the hearing drew to a close, the prosecutor started cross-examining Tolimir’s expert witness. Tolimir, Mladic’s assistant for security and intelligence, is charged with genocide and other crimes in Srebrenica and Zepa in 1995.