The examination-in chief of Dragomir Pecanac continued with the prosecutor trying to establish where Pecanac was and what he saw on 11, 12 and 13 July 1995 in Srebrenica. Judging from the few answers that he gave in open session, Pecanac saw little. His only concern at the time was ‘General Mladic’s security’ 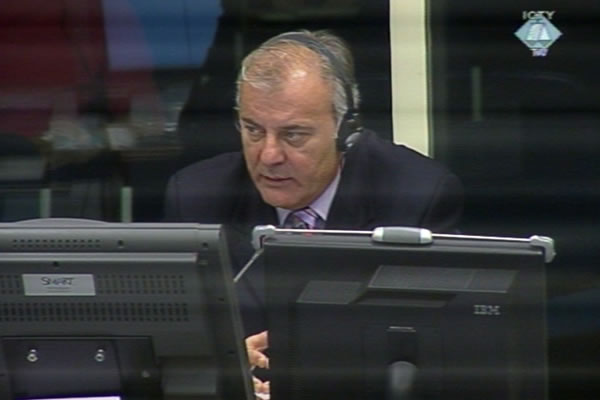 Continuing the examination-in chief of Dragomir Pecanac, the prosecutor showed the former intelligence officer in the VRS Main Staff the cover and the first page of the notebook that Pecanac had used in July 1995. This is one of the two notebooks Pecanac handed over last week to the Tribunal’s Registry together with some other documents at the beginning of his evidence at the trial of his former superior Zdravko Tolimir. Tolimir was Mladic’s assistant for intelligence and security. The prosecutor stated that Pecanac’s documents were ‘very important’ for Tolimir’s case and other cases before the Tribunal.

Pecanac confirmed that no entries were made in the notebook from 8 to 14 July 1995 and from 16 July to 15 August 1995. The contents of the notebook were not discussed in detail, at least not in parts of the hearing open to the public.

As he continued his examination, the prosecutor grilled the witness about some documents seized in his apartment in 2009. Among them was a document dated 12 July 1995, which speaks about the effort to separate the men of military age, aged 17 to 60, from the rest of the population in Potocari. Pecanac contends there is something ‘strange’ about the document. The document was decrypted on 12 July but was not received by ‘the Directorate’ until a month later, on 13 August 1995. Pecanac claimed that at the time the document was received, generals Ratko Mladic and Zdravko Tolimir and himself were in Bosnian Krajina. Pecanac was convinced that none of them ever ‘read’ the document, then or at any other point in time.

Answering the prosecutor’s questions, Pecanac said that he wasn’t ‘authorized or interested’ in the 10th Commando Detachment that was under the jurisdiction of Colonel Petar Salapura, chief of the Intelligence Directorate in the VRS Main Staff. The prosecutor put it to the witness that some other witnesses had claimed that Pecanac was ‘in the field’ with the soldiers from that detachment. Pecanac then recalled that General Milovanovic had ordered him in August 1995 to lead the soldiers from that unit on a mission to destroy an enemy artillery group near Drvar. Pecanac also confirmed that he was at the Detachment base after a soldier was killed.

Pecanac said his only concern was General Mladic’s security; this is why his ‘rifle was always with the safety off, a chambered round, ready for action’. On 12 July 1995, Pecanac travelled down the Bratunac-Konjevic Polje road in a car with General Mladic. He claimed he never saw ‘any prisoners’ en route. Pecanac also said that he didn’t remember Mladic being in Nova Kasaba, Konjevic Polje and addressing the prisoners in the field in Sandici on 13 July 1995. The ‘insider’ Momir Nikolic and several survivors from the Srebrenica execution sites testified about those events in their evidence.

Pecanac said that he saw accused general Tolimir two or three days before the Serb forces entered Srebrenica, and then again in Zepa on 17, 18 or 20 August 1995. Pecanac concluded that further questions might incriminate him and asked the judges to continue his evidence in private session. Dragomir Pecanac will continue his evidence tomorrow.