PECANAC PROTECTED FROM HIMSELF AND SARAJEVO MEDIA

In October 2011, Dragomir Pecanac refused to testify at the trial of Zdravko Tolimir and was convicted of contempt of court. Today, Pecanac appeared once again in court before the Tribunal. This time, Pecanac was ready to give evidence, but in closed session in order not to incriminate himself and to be protected from ‘the abuse of the Sarajevo media’ 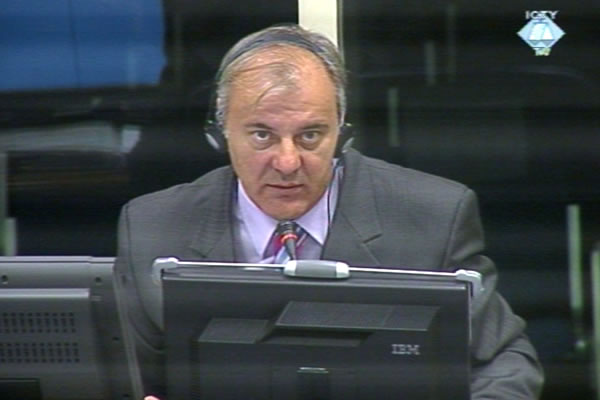 In October 2011, Dragomir Pecanac refused to comply with the Tribunal’s subpoena to testify at the trial of Zdravko Tolimir. Pecanac was arrested in Belgrade, transferred to The Hague and sentenced to three months for contempt of court. After he served the sentence, Pecanac was served with a new subpoena and a warning that he might face another contempt of court indictment if he fails to comply with it. The prosecutor didn’t give up on Pecanac’s testimony at the trial of Zdravko Tolimir and the judges agreed to call Pecanac once again.

This time, the former intelligence officer in the VRS Main Staff complied with the subpoena, but his evidence went on almost entirely in private session. Pecanac had asked for his evidence to be completely closed to the public because he feared that the ‘Sarajevo media may abuse my testimony’. The judges did not grant the request, but in the end decided to hear his evidence partly in private session after the prosecution argued that the witness should be protected against self-incrimination in the course of his evidence. For same reason, Pecanac’s lawyer was allowed to attend the hearing and the witness was cautioned he had the right to refuse to answer any questions that could incriminate him.

Only parts of Dragomir Pecanac’s evidence were open to public. The public heard Pecanac confirm that he brought potentially relevant documents with him and that he was willing to hand them over to the OTP and the Tribunal. Pecanac also said that he met Zdravko Tolimir in mid-1980s in the JNA. Both of them, like other JNA officers who were originally from the ‘former BH’, were transferred to the 2nd Military District in Sarajevo in May 1992, which was later transformed into the VRS. Pecanac worked as an officer in the intelligence directorate while Tolimir headed the security and intelligence department, which included both the intelligence and security directorates. Pecanac was effusive in his praise of Tolimir, extolling his virtues as a teacher and ‘a hard-working professional’.

Dragomir Pecanac was mentioned repeatedly at the trials for crimes in Srebrenica and Zepa. Former commander of the Drina Corps Radislav Krstic included Pecanac, Tolimir, Ljubisa Beara and Vujadin Popovic in Mladic’s ‘Knin clan’. Krstic claimed that these officers bore most of the blame for the Srebrenica crimes. Krstic is serving his 35-year sentence for complicity in the genocide in Srebrenica. Witnesses identified Pecanac as the officer who assigned a group of soldiers from the 10th Commando Detachment on 16 July 1995 to the task of executing more than 1,000 captured Bosniaks at the Branjevo farm. Witnesses also claimed that Pecanac took out Avdo Palic, the commander of the defense of Zepa, from the military prison in Vankov mlin in Bijeljina in the night of 5 September 1995. Palic disappeared. On August 2009, his remains were exhumed from a mass grave near Rogatica.