Last weekend, the Serbian authorities arrested former VRS intelligence officer Dragomir Pecanac and handed him over to the Tribunal. The Tribunal has charged Pecanac with contempt of court for failing to comply with the subpoena compelling him to give evidence. Pecanac postponed his plea, saying he was not capable of testifying 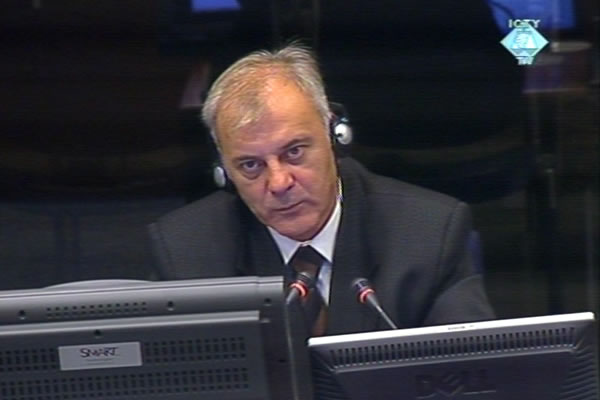 Dragomir Pecanac, former intelligence officer in the VRS Main Staff, refused today to testify at the trial of Zdravko Tolimir, who faces charges of genocide and other crimes in Srebrenica and Zepa in 1995. Pecanac said he was ‘not mentally capable’ of testifying. He demanded to be examined by a psychiatrist and neurologist. The presiding judge Fluege ordered that the unwilling witness be returned to the UN Detention Unit. Before he was taken out of the courtroom, Pecanac waved to Tolimir.

Pecanac was arrested in Belgrade and transferred to the Tribunal’s Detention Unit on 9 October based on the contempt of court indictment and arrest warrant issued on 21 September 2011. Pecanac had failed to comply with the subpoena compelling him to come and testify in The Hague. The Trial Chamber issued the subpoena on 2 September 2011.

The initial appearance of the accused began this morning and proceeded in so-called private session; the public was excluded. The initial appearance had not been announced. When the session began, Pecanac and his appointed counsel, German lawyer Jens Dieckmann, asked to postpone entering his plea pending consultations with his Belgrade lawyer Tomislav Visnjic, who is expected to arrive in The Hague.

After a one-hour break, Pecanac was ushered into the courtroom once again, this time to appear at a hearing in the Zdravko Tolimir case. The judge warned Pecanac that if he refused to testify again, his refusal might result in yet another indictment for obstruction of justice. The judge told Pecanac it was up to him whether he would leave The Hague tomorrow, after completing his evidence, or if he would spend a couple of weeks, or even months, in the Tribunal’s detention unit. The judge then formally asked the witness if he was willing to testify or not. Pecanac replied that he couldn’t testify and asked the Trial Chamber to show some understanding for his ill health. Any health problems that Pecanac might have will be dealt with by another trial chamber, which will try him for contempt of court.

Major Dragomir Pecanac was mentioned several times at the previous Srebrenica trials. General Radislav Krstic, former VRS Drina Corps commander, was the first to bring up Pecanac’s name in 2000. Krstic was found guilty of aiding and abetting genocide. In his interviews with the OTP investigators, Krstic claimed Pecanac was the third most responsible person for the massacre in Srebrenica, after Ratko Mladic and Ljubisa Beara; he placed Pecanac ahead of Zdravko Tolimir and the others.

Several witnesses identified Major Pecanac as the officer who picked seven or eight members of the 10th Sabotage Detachment for a special task, on the morning of 16 July 2011. According to the testimony of one of those men, Drazen Erdemovic, the chosen soldiers from the Sabotage Detachment executed 1,000 to 1,200 Bosniak captives at the Branjevo farm that day.

Major Pecanac was also mentioned as the officer who took Avdo Palic out of the military prison in Venekov Mlin in the night of 5 September 1995. Palic, who was the commander of the Zepa defense, was never seen again.

Finally, last month the so-called ‘Pecanac collection’ was admitted into evidence at the trial of Zdravko Tolimir. The collection consists of about 11,000 documents and 3,000 photos seized in the search of Pecanac’s Belgrade flat in December 2009.

Dragomir Pecanac’s further appearance before the judge where he will make his plea to the contempt of court charges will be scheduled later.