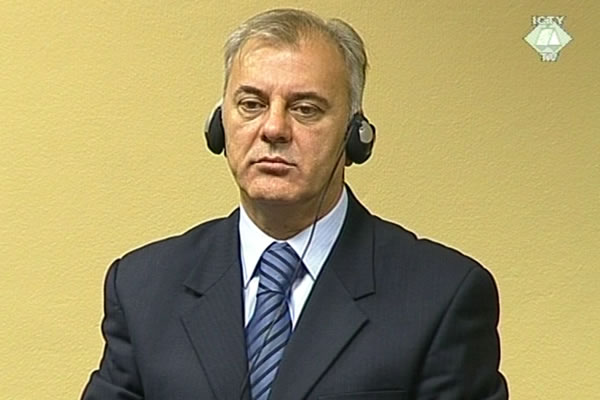 Former intelligence officer in the VRS Main Staff Dragomir Pecanac was found guilty by the majority of judges in the Trial Chamber of ‘deliberate and willful obstruction of the administration of justice’ and was sentenced to three months in prison. Judges Fluegge and Mindua voted for the conviction, with Judge Nyambe dissenting.

Dragomir Pecanac was charged with contempt of court for his failure to comply with a Tribunal’s subpoena to testify at the trial of Zdravko Tolimir, Ratko Mladic’s assistant for security and intelligence in the VRS Main Staff, who is charged with genocide and other crimes in Srebrenica and Zepa in the summer of 1995.

Following his arrest in Serbia on 27 September 2011, Pecanac was transferred to the Tribunal’s detention unit. Pecanac was then brought before the judges hearing the case against Zdravko Tolimir, but refused to give evidence. Pecanac said he couldn’t testify for ‘health reasons’. Although ‘health’ could justify the witness’s failure to comply with a subpoena, the Trial Chamber noted that Pecanac didn’t "substantiate" at all his claim that he was unable to testify for health reasons.

The majority in the Trial Chamber concluded that the accused was able to understand the meaning of the subpoena to testify and the consequent obligations. Presiding judge Fluegge noted that contempt of court was "a serious offence, which goes to the essence of the administration of justice". By failing to comply with the Trial Chamber’s order, by failing to appear before the court and to testify Pecanac ‘acted against the interest of justice’, the majority of the judges decided.

Pecanac has already spent 74 days in custody, first in Belgrade where he was arrested, and then in The Hague. This time will be credited against Pecanac’s sentence. In the meantime the prosecution in the Tolimir case has asked the Trial Chamber to set a new date for Pecanac’s evidence and to order him to testify. At previous hearings, presiding judge Fluegge warned Pecanac repeatedly that he could face another contempt of court indictment if he refused to testify again.