The contempt of court trial started without the accused who is ill and remained in the Detention Unit. The trial began without the prosecution as it is not a party in the trial, without the opening statements and without the examination of witnesses. The judges appeared as both the prosecutors and triers 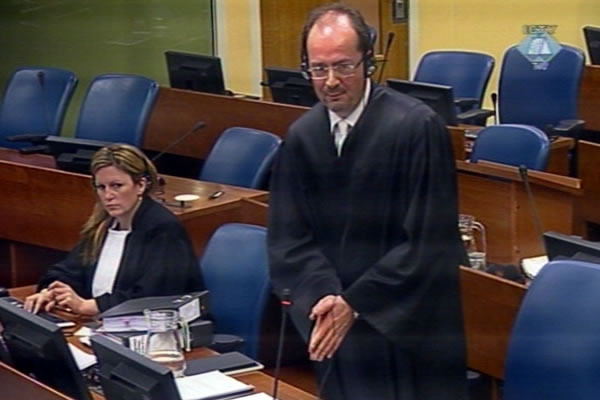 The first day of the trial of Dragomir Pecanac, former intelligence officer from the VRS Main Staff, proceeded in a rather unusual manner. Pecanac has been indicted because he refused to comply with a subpoena to testify in the case of Zdravko Tolimir. First of all, the accused was not in court for health reasons, but he signed a waiver of his right to attend the hearing. The prosecution also didn’t appear as it is not a party in the proceedings. Pecanac was indicted by the Trial Chamber hearing the case which will finally hand down the judgment.

Instead of a regular case, with the opening statement, examination of witnesses and admission of documents into evidence, presiding judge Floegge presented a brief summary of the Pecanac case. Judge Floegge began with the subpoena to testify issued on 31 August 2011, and then went on to describe ‘the persistent obstruction of the accused’ who refused to communicate with the Tribunal staff as they tried to arrange his trip in The Hague, and finally came to the contempt of court indictment and the warrant for the arrest of the accused and his transfer from Belgrade to The Hague on 9 October 2011. Pecanac refused to testify in the Tolimir case in court at the Tribunal twice, claiming that he was unable to testify for health reasons. Pecanac pleaded not guilty to contempt of court.

The Trial Chamber acting as the prosecutor admitted into evidence four documents: the subpoena to testify, the decision on safe conduct, a memorandum from the relevant Serbian authorities stating that the subpoena had been served, and finally, an internal memorandum from the Victims and Witnesses Unit detailing the efforts made to bring the witness to The Hague and his ‘obstructive behavior’ that thwarted the efforts. The defense objected to the admission of the last document, claiming that it contained ‘second, third and even fourth-hand information’. The Trial Chamber rejected the objection.

After the Trial Chamber rested its case, so to speak, Pecanac’s defense lawyer Jens Dieckmann made an oral motion, asking the judges to release the accused at that point in the trial, in line with Rule 98 bis. Dieckmann noted that the prosecution, which in this case meant the judges, in his opinion failed to present sufficient evidence which could lead to a conviction. After two hours of deliberation, the judge dismissed the defense’s motion with a majority of votes and with Judge Nyamba’s dissenting. The Zambian judge had been opposed to indicting the unwilling witness because she felt it was ‘premature’.

Defense lawyer Dieckmann sought to tender into evidence 31 defense exhibits and the Trial Chamber admitted them all without any objections. The hearing was then adjourned until tomorrow. The trial will continue and end with the defense closing argument. The medical certificate confirming that the accused was ill indicated that he wouldn’t be able to appear in court for at least two days. The presiding judge nevertheless expressed his hope at the end of the hearing that the trial would continue tomorrow in Dragomir Pecanac’s presence.