WORLD WAR III ACCORDING TO TOLIMIR

In the cross-examination of Petar Salapura, former intelligence officer in the VRS Main Staff, General Zdravko Tolimir tried to contest the adjudicated facts related to the breakup of the former Yugoslavia and the independence of its former republics, BH in particular. Salapura was Tolimir’s immediate subordinate in July 1995 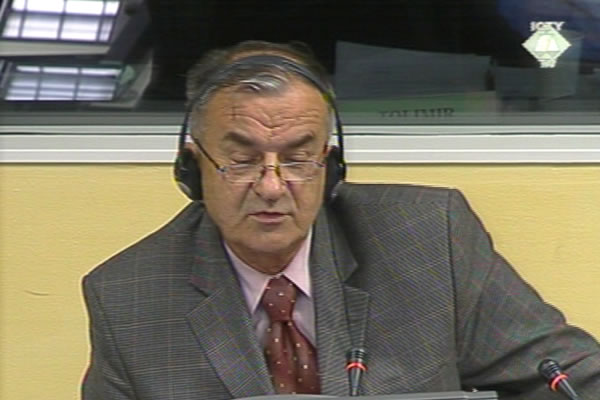 The war in BH marked the start of the World War III, the Muslims initiated it with the support of the international community, making it possible for NATO to expand into the Balkans and on to Libya, all under the pretext of peace missions in these countries. This is what the accused Tolimir said today, when the judges asked him why he was devoting most of the time he had for the cross-examination of Petar Salapura to issues related to the cause of the war in BH and the events from 1992. According to the Trial Chamber, the topic is not relevant for Tolimir as he is charged with genocide and other crimes in Srebrenica and Zepa in July 1995. The current witness, Colonel Salapura, is a former officer in the intelligence service of the VRS Main Staff.

The presiding judge repeatedly warned the accused general that he was not using court time efficiently when Tolimir insisted on addressing the issues such as the attack on the JNA column in the Dobrovoljacka Street in Sarajevo on 3 May 1995 and the role of Stjepan Mesic, the last president of the SFRY presidency, in the breakup of the former Yugoslavia. Tolimir defended his line of questioning, saying that those events influenced the actions of the witness and his own during the war.

Since the presiding judge asked for a legal explanation, Tolimir consulted with his legal advisor and said the ‘defense contests the adjudicated facts’. Tolimir explained that the purpose of his line of questioning was to contest the adjudicated facts such as the ‘path to BH independence’. According to the defense, BH did not gain independence when the Parliament adopted the declaration of independence on 15 October 1991 as adjudicated, but when the war broke out.

While the Trial Chamber did not dispute the right of the defense to contest adjudicated facts, the judges warned the accused that they ‘fail to see how the evidence of this witness may serve to contest any of the eight adjudicated facts’ related to the events from 1991 and 1992 and the breakup of the SFRY. The presiding judge told the accused, who is defending himself, that the Trial Chamber must ensure that the court time is used efficiently, advising Tolimir to keep that in mind as he used his remaining time.

Tolimir nevertheless asked some more questions about ‘the fighting in Kupres’ that went on before the BH declaration of independence, as the witness confirmed. Tolimir tried to contest the adjudicated fact about the independence of BH with the claim that the captured JNA soldiers from Kupres ‘were taken to prison camps in Croatia’. Many of them were killed or disappeared.