FORGED DOCUMENTS FOR THE ACCUSED IN THE HAGUE

In January 1996, Petar Salapura, who is now testifying as a prosecution witness at the trial of general Zdravko Tolimir, asked the Republika Srpska MUP to issue ID documents ‘with Serb names or new Serb names and surnames if the holders already have Serb names’ to eight soldiers of the 10th Commando Detachment. Some of them were foreign nationals or were indicted by the Tribunal in The Hague 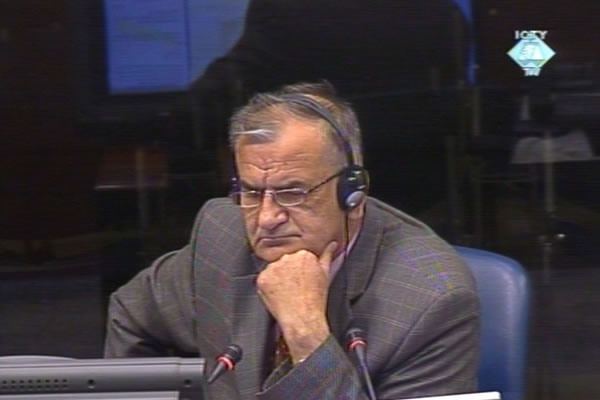 In January 1996, the Republika Srpska interior minister received a telegram from the Intelligence and Security Sector in the VRS Main Staff with a request to issue ID documents to eight soldiers of the 10th Commando Detachment who were ‘foreign citizens or are indicted by the Tribunal in The Hague’. The ID documents were to be issued with ‘Serb names or with different names and surnames if they already have Serb names’. Petar Salapura, who was the chief of the Intelligence Administration in the VRS Main Staff at the time, signed the request. Today, Salapura continued his evidence at the trial of his former superior, General Zdravko Tolimir, Mladic’s assistant for security and intelligence.

The prosecutor had to work hard to make the witness confirm the authenticity of the telegram. Salapura, who was called to testify in The Hague as a prosecution witness, claimed he didn’t remember ever sending such a request. He also maintained that he learned of the mass executions that followed the fall of Srebrenica only after Drazen Erdemovic’s confessed to his part in them in March 1996. Erdemovic was a soldier in the VRS 10th Commando Detachment and participated in the execution of more than 1,000 Bosniak captives at the Branjevo farm on 16 July 1995.

The request Salapura sent to the interior minister two months before Erdemovic’s confession indicates that the witness had to have known about the mass executions even before March 1996, the prosecutor contended. Moreover, the prosecutor argued, it showed that Salapura participated in an attempt to conceal the perpetrators and protect them from prosecution. The witness persistently evaded answering the questions about the request; his evasion was cut short by the presiding judge who asked him a series of questions on this topic. The former intelligence officer in the VRS Main Staff then reluctantly admitted that he had sent this request.

The prosecutor then asked Salapura if that could have ‘angered’ his superior, General Tolimir, since the request was sent from his sector. Salapura first said he doubted that Tolimir even knew about it, only to confirm that Tolimir had to have received reports about the request.

Salapura spoke about the details of why and how he had requested forged documents for the soldiers of the 10th Commando Detachment only when General Tolimir began his cross-examination. General Tolimir is on trial for genocide and other crimes in Srebrenica and Zepa in the summer of 1995.

The intention was not to hide anything but to enable those soldiers – which included ‘a Muslim and two Croats’ – to ‘live normally, without any kind of trouble’ in Bijeljina where they settled down, Salapura claimed. The idea was to prevent them from ‘being exposed to provocations’ as non-Serbs. Nothing was concealed, the witness said. He corroborated this by saying ‘very soon journalists discovered’ those soldiers in Bijeljina.

Salapura today confirmed that on 12 July 1995 in Belgrade he was told by a ‘trusted person’ the date when the Croatian Army would launch its offensive on the Republic of Serbian Krajina; the operation was codenamed Storm. In an effort to relay the information to the Main Staff and General Mladic, Salapura went to the Bratunac and Srebrenica area on 13 July 1995. As Salapura said today, he learned about the fall of Srebrenica on 12 July 1995. On 13 July 1995 Salapura saw ‘women, children and the elderly’ being loaded onto buses in Bratunac. However, Salapura didn’t see the moment when the men of military age were separated from their families. Salapura passed twice through Konjevic Polje and saw about 500 prisoners at the stadium. The witness didn’t know anything about where and how they ended up. From 14 July 1995 on, Salapura was in the Main Staff in Crna Rijeka; he nevertheless claimed that he didn’t know anything about what was going on in those days in the Zvornik area. As alleged in the indictment, thousands of Bosniaks captured after the fall of Srebrenica were executed in a number of locations there. The intelligence and security officers from several VRS units, including the Main Staff, participated in the executions.