‘BLOCKADE AND CLEAN-UP’ IN SREBRENICA

Former security officer in the VRS Main Staff testifies for the prosecution at the trial of Zdravko Tolimir. On 17 July 1995, the witness reported to the accused general about the progress of the ‘blockade and clean-up’ operations in the enclave after it fell to the Bosnian Serb forces 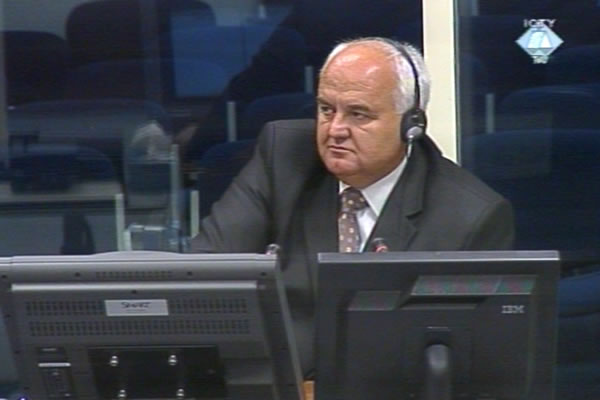 General Dragomir Keserovic, prosecution witness at the trial of Zdravko Tolimir, continued his evidence today. Keserovic described how he was sent to Bratunac on 17 July 1995 to check the progress of the ‘blockade and search operations’ in the Srebrenica area. General Tolimir was instrumental in the amendment of Mladic’s initial order of 16 July 1995, according to which Keserovic was to assume command in the operation and step up the efforts, Keserovic said today. Tolimir intervened after Keserovic complained he couldn’t accomplish the task ‘without a properly established command in place’.

In July 1995, Keserovic, who was a lieutenant colonel at the time, served as chief of the military police department in the VRS Main Staff. However, Keserovic was not in command of any of the units that were part of the joint RS military and police forces that fought in the Srebrenica operation. In the late evening of 16 July 1995, after his conversation with Mladic, Tolimir told Keserovic he didn’t have to ‘assume command’. Keserovic was to go to Bratunac to check on the progress of the operation and to talk to the commander of the Dutch Battalion. Keserovic was to inform the UN commander that the ‘weapons and equipment’ the VRS had seized from them ‘will be returned’ and that the Dutch would be evacuated via Serbia instead of the Sarajevo airport, as planned previously.

The next day, on 17 July 1995, Keserovic went to Bratunac and completed his mission. Keserovic confirmed that on the occasion he talked to the commanding officers in the units that took part in the blockade and clean-up operations. Keserovic also talked to the commander of the Bratunac Brigade, Vidoje Blagojevic. Keserovic was present when Colonel Jankovic translated the message to the UN Dutch Battalion commander. Keserovic was also there when the International Committee of the Red Cross organized the evacuation of the wounded prisoner from Bratunac. Keserovic confirmed that a group of prisoners was separated from the rest; they were not allowed to leave. Keserovic was told that the prisoners were on the list of war crimes suspects.

When Keserovic returned, he submitted a report to General Miletic in the operations center of the Main Staff in Crna Rijeka late in the evening of 17 July 1995. That same evening, Keserovic reported to General Tolimir. According to Keserovic, Tolimir told him that ‘it is not okay’ to detain wounded prisoners; the situation had to be dealt with soon. Keserovic didn’t know how ‘it was dealt with’ since on 23 July 1995 he moved to the Main Staff forward command post in Drvar to join General Manojlo Milovanovic.

At the end of the examination-in chief, the prosecutor put to Keserovic the testimony of a witness who was in the special police and was involved in the ‘blockade and clean-up’ operation. He witnessed the capture of about 200 persons. The prisoners disappeared without a trace until they were finally exhumed from a mass grave in Cerska. Keserovic claimed he knew nothing about it. When the prosecutor repeated the question, Keserovic again categorically denied that he had commanded the ‘blockade and clean-up’ of the Srebrenica area after the fall of the enclave.