As she completed her testimony at the trial of Zdravko Tolimir, on charges of genocide and other crimes in Srebrenica and Zepa, witness Esma Palic accused Mladic’s former assistant for security that in July 1995, he led her husband into a trap. Her husband Avdo Palic was the commander of the BH Army Zepa Brigade 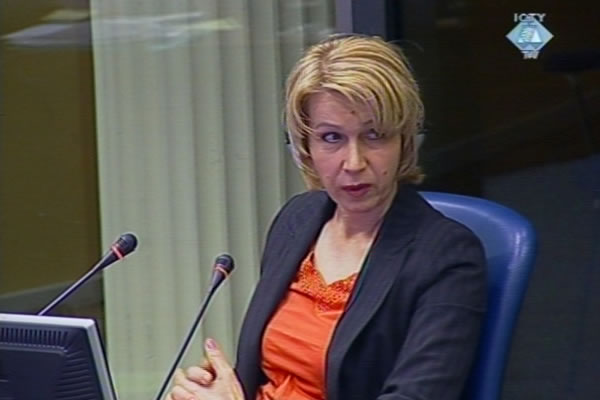 Nothing was done in Zepa without Zdravko Tolimir, and there is nothing related to Zepa and Avdo Palic that Tolimir doesn’t know, said Esma Palic at the end of her testimony against Mladic’s assistant for security in the VRS Main Staff. Esma Palic’s husband, Avdo Palic, was the commander of the Zepa Brigade of the BH Army. Palic was captured in July 1995 by the Bosnian Serb army, after the fall of the UN-protected enclave. His fate remained unknown until August 2009, when his remains were identified after the exhumation from a mass grave near Rogatica.

Esma Palic was not able to answer most of the questions the accused general asked as the cross-examination continued, since they mostly had to do with the causes of the war in BH in April 1992, and the establishment of the UN-protected areas in March 1993. Irritated by the accused who put it to her that the VRS attack on Zepa was caused by commando actions launched from the enclave against the neighboring Serb villages and VRS positions by the BH Army soldiers, the witness who was visibly upset confirmed that on the eve of the VRS attack in July 1995, the Zepa Brigade soldiers asked the UN troops to give them back their weapons in order to be able to defend themselves. The VRS did come under attack, the witness confirmed, but not civilians, Esma Palic insisted. Avdo Palic and his fighters did not commit any crimes, she added.

In the re-examination, the prosecutor asked the witness what led her to conclude that Avdo Palic was handed over to Zdravko Tolimir after his arrest in July 1995. As she explained, the conclusion was based on the statements of VRS soldiers who took part in the kidnapping, as she called it, of her husband from the UNPROFOR base in Zepa. Tolimir also questioned Avdo Palic in Zoran Carkic’s apartment, said Esma Palic. According to her, Carkic himself confirmed that in his statement to the VRS Investigating Commission. The prosecutor showed the witness a document sent from the Rogatica Brigade command to the VRS Main Staff, to the Drina Corps commander, General Krstic, and to the intelligence department in the corps, stating that ‘the interview with Avdo Palic yielded the information about the mine fields’.

As Esma Palic replied, she has never seen this document, but this is exactly what she needs in her fight for justice and her effort to find out all the details about her husband’s fate. ‘Zdravko Tolimir led my husband straight into a trap,’ Esma Palic said. ‘The two men were the ranking officers of the two warring sides in Zepa. Had Tolimir been captured, Avdo Palic would have been responsible for his fate, and since Palic was the one in captivity, Zdravko Tolimir is responsible,’ Esma Palic concluded.

The next prosecution witness is testifying with protective measures as Witness PW 064; on 13 July 1995, he witnessed the killings in front of the co-op warehouse in Kravica.