GENERALLY KNOWN FACTS AND RUMORS, ACCORDING TO DR PIROCANAC

Zdravko Tolimir, on trial for genocide and other crimes in Srebrenica and Zepa, cross-examined Zoran Petrovic Pirocanac, Belgrade journalist who holds a doctorate in ‘present history’ from a Parisian university. Petrovic Pirocanac expounded in great detail his geopolitical views and theories about ‘Islamist’ conspiracies corroborating them with second-hand ‘facts’ 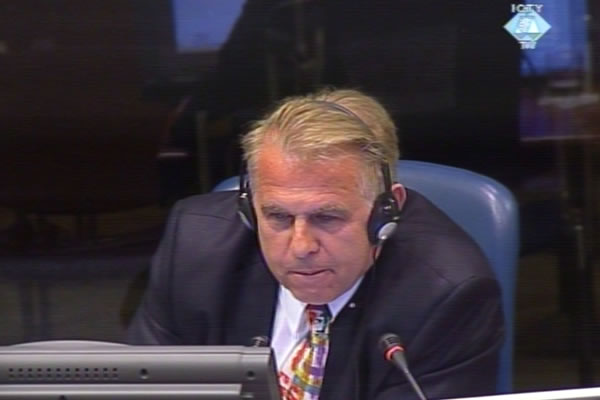 ‘It is a generally known fact, general...’ This is how prosecution witness Zoran Petrovic Pirocanac, journalist from Belgrade, began most of his answers to the accused Zdravko Tolimir in his cross-examination. In most of his questions, Tolimir asked Dr Petrovic to share his geopolitical expertise about the break-up of Yugoslavia, the war in Bosnia, the independence of Kosovo, the spreading of ‘Islamism’, the US interventions in Afghanistan and Iraq and similar issues. On several occasions, presiding judge Cristoph Floegge warned Tolimir not to ask Pirocanac for any ‘expert explanations’ because he had not been called as an expert witness. Petrovic was called to testify about facts: what he saw and recorded during his two-day stay in the Srebrenica area on 13 and 14 July 1995, Judge Floegge said.

Pirocanac as a fact witness proved to be no less problematic, since it turned out he mostly spoke about ‘facts’ of which he as a witness had no direct knowledge. He heard about them second hand. For example, Petrovic said that he heard about the ‘fact’ that Osama Bin Laden met Alija Izetbegovic in 1993 or 1994 from German journalist Renate Flotau. As for the ‘fact’ that about 100 fighters from the column that headed towards Tuzla through the woods after the fall of Srebrenica in July 1995 did not reach the liberated territory before next spring and were accommodated in the IFOR base used by the US forces and were later transferred to the USA, Petrovic learned from French intelligence officer Bunel who was later convicted of spying for Serbs. Pirocanac then used his ‘analysis of dates and facts’ and ‘the information obtained from the Serbian Diaspora’ to conclude that those Muslims now live in Richmond but their names were on the Srebrenica victims’ list. The third ‘fact’ Petrovic Pirocanac presented to the judges was that somewhere on Mt. Igman the French and Dutch ‘blue helmets’ had coffee with Bin Laden’s mujahideen. A French TV crew that shared the story with Petrovic saw it but didn’t film it.

Pirocanac did not say who told him the ‘generally known fact’ that ‘Bin Laden’s men had infiltrated the BH diplomatic service and were sent to Tanzania and Zambia where they organized terrorist attacks on American embassies’. This ‘fact’ surprised Zambian judge Niambe, who noted that there had been no terrorist attacks in her country asking the witness if he actually meant Kenya. Pirocanac then corrected himself saying ‘Excuse me my honor’ in fluent English, so fluent in fact that it baffled Google Translate when we ran it in an effort to find out what he meant.

In the re-examination, the prosecutor asked the witness to explain how the incriminating frames were deleted from the original tapes he had made in the Srebrenica area on 13 and 14 July 1995. The excerpts showed the dead Muslims in front of the Kravica warehouse doors, captives on the balcony of the so-called White House in Potocari and a large group of prisoners in the field near Sandici. This footage was also in the film shown on 17 July 1995 by Belgrade-based Studio B channel. Petrovic said he was careless and gave the material to ‘anyone who asked’, adding that he didn’t know who edited out those frames. As Petrovic noted, the prosecution should be grateful to him for ‘risking my life’ to record the footage that was among the most precious evidence in the archives of the Tribunal in The Hague.

In his previous evidence at the trial of the seven Bosnian Serb military and police officers charged with crimes in Srebrenica in 2007, Petrovic complained that the prosecution had labeled him the ‘so-called journalist’, claimingit was impossible to tell if Petrovic was a ‘journalist or a policeman’. This time round, Pirocanac said he had had ‘a fruitful conversation’ with the prosecutors; he now believes they don’t want to discredit him and charge him with ‘speech crime’, contrary to what the accused Tolimir claimed.