General Zdravko Tolimir continued the cross-examination of the former chief of the military police in the VRS Main Staff. The international forces favored one side in the conflict and could no longer claim they were part of a peace-keeping mission, since it was relaying intelligence about the VRS to the BH Army, tolerated the illegal arming in the protected areas and launched air strikes against the Bosnian Serb positions, Tolimir argued. Tolimir is charged with genocide and other crimes in Srebrenica and Zepa in 1995 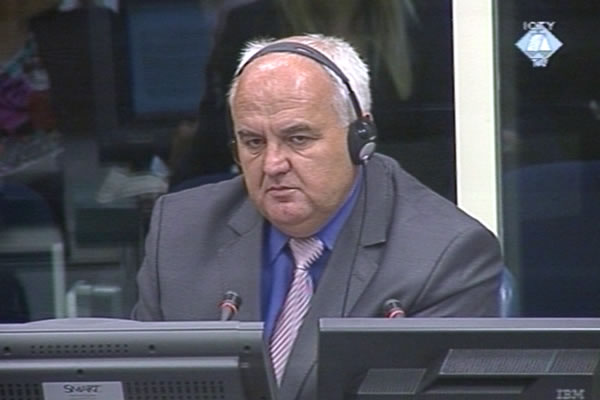 In March 1995, the BH Army troops were superior to the VRS. The BH Army planned an offensive in the protected areas of Srebrenica and Zepa to merge the two enclaves and link them up with Tuzla and hopefully even with the Gorazde enclave. This is how the accused general Zdravko Tolimir described the situation on the Eastern Bosnian front in the spring of 1995 as he cross-examined prosecution witness Dragomir Keserovic. Keserovic was the chief of the military police in the VRS Main Staff and was subordinated to Tolimir. At the time, Keserovic was in Krajina, on the western front, but he confirmed Tolimir’s description, adding that the intelligence on the movements and arming of the BH Army troops ‘reached Krajina too’.

Tolimir illustrated his claim that UNPROFOR was aware of the BH Army intentions with a quote from a statement General Rupert Smith gave in August 1996. The UNPROFOR commander in BH described his meetings with the military and political representatives of the warring sides in March 1995, and said that he realized at that point that the ‘Bosnian Serbs believe that further fighting is inevitable because the Eastern enclaves are too strong’. The ‘BH Army obviously doesn’t intend to extend the cease-fire agreement that has been in force since late April 1995’.

The international forces not only tolerated such behavior of the BH Army but in the final months of the war they joined the forces that fought against the Republika Srpska Army, Tolimir contended. Keserovic agreed with Tolimir’s claim and confirmed that the NATO forces ‘acted together with the Croatian Army and in late August 1995, they destroyed the VRS communications system’, a vital operative element of an army. As a consequence, the VRS lost ground in 18 BH municipalities which had been under the VRS control until then, Keserovic explained.

UNPROFOR was informed about the attack ‘as it was informed about all the previous attacks by NATO forces on the positions held by the Serbs in Bosnia and Croatia’. This is evident from the fact that the UN peace-keepers left the positions that were close to the Serb forces, the witness and the accused agreed. Tolimir claimed that UNPROFOR relayed intelligence about the VRS to the BH Army and thus sided with one of the warring parties.