‘Avdo was an irredeemable optimist and he believed that one day people would be ashamed of what they did in war, that they would feel remorse, he believed in justice’, said Esma Palic, whose husband commanded the defense of Zepa, as she testified at the trial of Zdravko Tolimir, charged with genocide and other crimes in Zepa and Srebrenica in July 1995. According to Esma Palic, her husband described Tolimir as a ‘trained officer’ who could be trusted 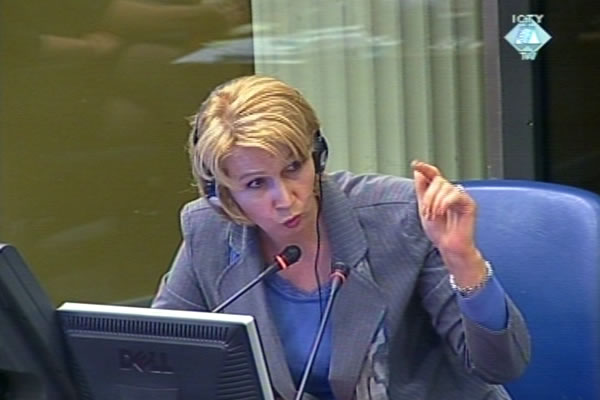 At the trial of Mladic’s assistant for security and intelligence in the VRS Main Staff, Zdravko Tolimir, the court heard testimony of Esma Palic. She described how she spent most of the war with her two babies in a shelter near her parents’ house in Zepa, to escape daily artillery attacks. ‘There is no place smaller than Zepa that has been hit with more shells,’ she said. Her husband, who commanded the Zepa Brigade of the BH Army, spent most of his time on the defense lines of the enclave.

After the fall of Srebrenica in July 1995, she heard stories from the survivors about the atrocities committed by the Serb forces; those were ‘enough to make you wish to die lest you should fall into their hands’. The shelling increased in frequency and her parents’ house was completely destroyed. They went to Stitkov Do, where they sheltered until 24 July, when the evacuation of Zepa started.

On that day, ‘that endlessly warm day in July’, ‘distraught people’ gathered in the center of Zepa, the witness recounted. ‘All of them had lost someone already,’ she said, and ‘long-bearded’ Serb soldiers made insulting comments. She met her husband in front of a café in the town center. He told her they would be evacuated and that ‘everything would be fine’, because Zdravko Tolimir had given him guarantees to that effect. He described Tolimir as a ‘trained officer’. He said he would escort the convoy in a car together with Tolimir. She begged him ‘not to trust Tolimir’, despite the fact that ‘Tolimir looked civilized, unlike the others’.

Esma Palic said goodbye to her husband when the convoy stopped near Kladanj. She continued on with her children on foot until she reached BH Army-controlled territory. Avdo Palic went back to Zepa and she never saw him again. A few days later she learned he had been captured. ‘This is when my war started’, Esma Palic said, recounting how ‘day in day out’ she was trying to find out what had happened to her husband. When his body was finally identified 14 years later, she continued ‘searching for justice and those who are responsible’ for her husband’s death.

Before she left Zepa, Avdo Palic handed to his wife a folder with the correspondence with Rajko Kusic, commander of the Rogatica Brigade, and Dragomir Pecanac, security officer from the VRS main Staff. Among the papers that the witness looked at much later, was a note, written on a piece of paper taken from a cigarette pack, that Ratko Mladic sent to Avdo Palic with a bottle of whiskey. This was an attempt to convince Palic to leave Zepa, says Esma Palic, adding her husband would never have agreed to it.

In the cross-examination, Tolimir yet again argued that the people left Zepa voluntarily. The accused claims he personally made an offer to Avdo Palic on 24 July to leave for Kladanj with his family, but he refused. Visibly upset, Esma Palic said her husband never mentioned the offer to her, but she expected it, as ‘Avdo was a thorn in the Bosnian Serb side in Zepa’. She insisted she was ‘proud’ that her husband did not want to leave the people of Zepa and his fellow fighters, who would probably have faced the same fate as the people of Srebrenica. She asked Tolimir why, ‘if you were so well-meaning’, he did not save Palic’s life after her husband ‘did his mission and saved the civilians from Zepa’.

Tolimir also put it to the witness that the BH Federation authorities stalled the identification of her husband’s remains, but Esma Palic rejected the argument. She accused the Republika Srpska authorities of deliberately trying to cover up the place where her husband was buried. They, Esma Palic said, ‘handed over his unidentified body to the federal commission for missing persons; as a result, she had to wait for eight years for him to be identified. Visibly upset, the witness labeled this conduct on the part of the RS authorities ‘an affront and a crime’.

Esma Palic dismissed Tolimir’s argument about the voluntary surrender of the enclave to the Serb forces: she said Hamdija Torlak, who represented the people of Zepa had been ‘forced’ to sign the purported agreement about the surrender. Anyone else would have had to do the same in his shoes, she said. ‘There was no freedom of choice whatsoever’, the witness said. She said Tolimir’s argument was ‘ironic’: one could hardly speak about freedom of choice after all the ‘killing, torching and slaughter’ by Mladic’s forces. “That would make us right morons,’ Esma Palic said.

The cross-examination of the Zepa defense commander’s widow will continue tomorrow.