ACCUSED AND PROSECUTION WITNESS AGREE ON EVERYTHING

Zoran Carkic, former security officer in the VRS Rogatica Brigade, confirmed today in his cross-examination every claim put to him by the accused general Zdravko Tolimir, Mladic’s assistant for security in the VRS Main Staff who is on trial for genocide and other crimes in Srebrenica and Zepa 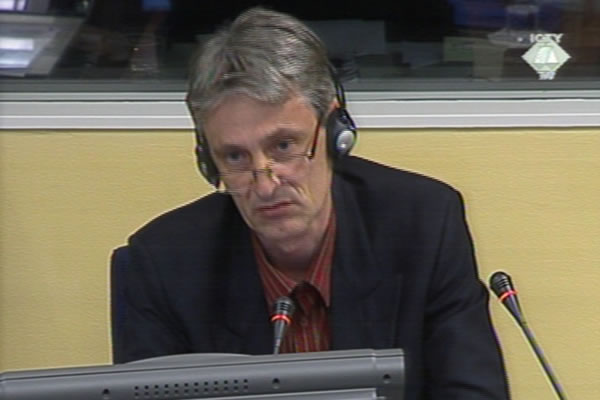 In his cross-examination, prosecution witness Zoran Carkic promptly agreed with and confirmed every claim put to him by the accused Zdravko Tolimir. Carkic agreed that ‘the causes of the war’ in BH were ‘imported from outside’ and ‘provoked’ by incidents such as the attack on the JNA column in the Dobrovoljacka Street in Sarajevo. Furthermore, Bosniaks ‘abused the status’ of protected areas, because they launched commando attacks from Srebrenica and Zepa on the neighboring Serb villages and VRS positions. The witness also agreed with the accused that the population of the enclaves was ‘free to choose’ in July 1995, and they chose to leave the enclaves.

In July 1995 Carkic was among the VRS security officers whose superior in the Main Staff was General Tolimir. The reasons why the prosecution felt this witness’s testimony was important will remain unclear because he gave most of his evidence in closed session. The final part of his cross-examination also went on in closed session. However, while the court was in open session, Tolimir’s former subordinate confirmed to the accused general that officers in the VRS intelligence service, from the level of battalion to the Main Staff, did not have the power to command; they could only give proposals and advice to the command in charge.

In Carkic’s cross-examination, Tolimir also tried to contest the importance of a letter he dictated to the witness in July 1995. The prosecution alleges that in that letter Tolimir informed General Milan Gvero about 800 prisoners from Srebrenica who could be housed in the horse and pig farm in Sjemecka ravan, in the area of responsibility of the Rogatica Brigade.

Carkic confirmed that the farm was never used as a prisoner facility and agreed with the accused that the letter he dictated was a ‘notice’, not an order. Carkic also agreed that the purpose was only to indicate suitable buildings where prisoners could be housed ‘if need arose’. In the part of the hearing open to the public, Zoran Carkic didn’t say if any prisoners, and how many of them from Srebrenica, were transferred to the Rogatica Brigade and what their fate was.

Former security officer in the Rogatica Brigade now works in the Department of Spatial Planning and Municipal Services in the Rogatica municipality. It is his job, for instance, to grant planning permissions for the houses of the few refugees who had returned to the municipality, he explained. The returnees confirm that the VRS order to evacuate Zepa in July 1995 covered only ‘the period until the end of the war’, Carkic agreed with Tolimir. They were not ordered to leave the area forever, he said.

In a brief re-examination, the prosecutor asked the witness about the operation in which a number of mosques and Muslim cultural monuments and houses in the municipality were destroyed. The Rogatica Brigade took part in that operation. The witness, who became visibly agitated, denied that he was ever involved in anything of the sort, saying it was ‘illogical’ to say that he used to destroy houses only to rebuild them today. The trial of Zdravko Tolimir continues on Monday.