A terrible crime happened in Srebrenica and it cannot be justified in any way, Momir Nikolic said at the trial of Zdravko Tolimir. The former chief of security and intelligence in the VRS Bratunac Brigade, who pleaded guilty to the Srebrenica crimes in 2003, is currently serving his 20-year sentence 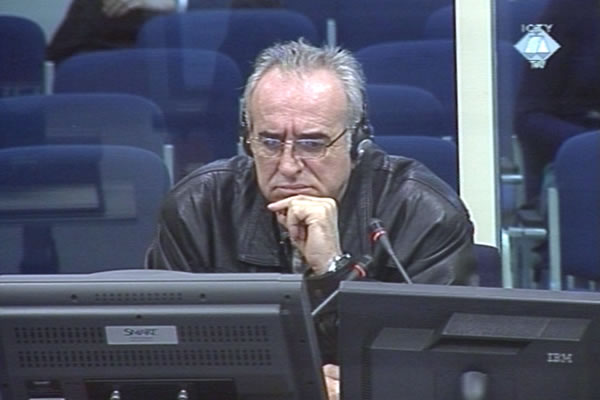 Nikolic testified today at the trial of Zdravko Tolimir, Mladic’s assistant for security in the VRS Main Staff. Nikolic confirmed the contents of the plea agreement he made with the prosecution in 2003. Nikolic also confirmed the accuracy of a document in which he admits he ‘told lies’ when he said that he had taken part in the crime in Kravica. As alleged in the indictment, about 1,000 Bosniaks, captured after the fall of Srebrenica, were executed in a co-op warehouse in Kravica. Today Nikolic insisted that it was the only ‘lie’ he told. His evidence was a truthful description of what he saw and experienced, including his own role in the events in Srebrenica. Nikolic was, as he claimed, deeply remorseful for it.

‘It’s not only that I am sorry, this is the cause of my suffering’, Nikolic said with tears in his eyes, apologizing to all the victims. Nikolic – a former teacher – apologized in particular to ‘my students who were killed in the crimes in Srebrenica’. Although his role was not crucial, as Nikolic said, because he ‘neither ordered nor planned’ the crimes, Nikolic felt responsible because he ‘obeyed orders’ that resulted in a large number of victims and caused a great deal of suffering to the people in the enclave. ‘I am aware of my guilt and I have repented for it’, Nikolic said. Replying to the prosecutor, Nikolic confirmed that he was the first VRS officer to plead guilty for the crimes in Srebrenica.

Today, the former chief of security and intelligence in the VRS Bratunac Brigade described the functioning of the security and intelligence element of the chain of command in the VRS units. According to the rules of service inherited from the former JNA, the security and intelligence department in a brigade was in charge of the reconnaissance units and a military police platoon, Nikolic explained. The department chief was responsible for their work, but only unit commanders had the power to issue orders. In July 1995, Colonel Vidoje Blagojevic commanded the Bratunac Brigade in which Nikolic served. Blagojevic was tried before the Tribunal. He was convicted of the Srebrenica crimes and sentenced to 15 years in prison.