One day after the fall of Srebrenica, it was clear that all Muslim men captured after Mladic’s troops entered the enclave would be executed, former security officer in the VRS Bratunac Brigade said on the third day of his evidence at the trial of Zdravko Tolimir 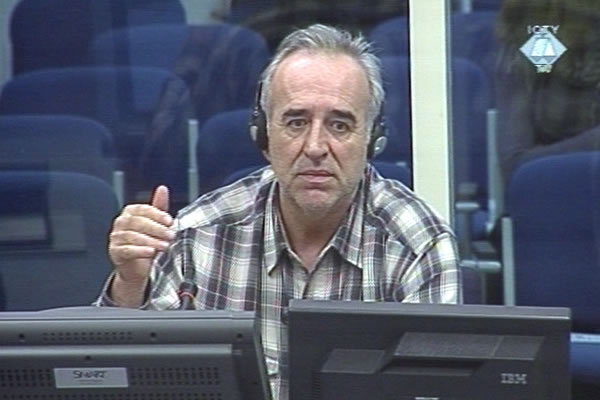 Momir Nikolic is currently serving his 20-year sentence for the Srebrenica crimes, following his guilty plea. Nikolic described in detail the VRS operation Krivaja 95 and its aftermath in Srebrenica in July 1995. Nikolic headed the Security and Intelligence Department in the Bratunac Brigade. On 8 July 1995, Colonel Radislav Jankovic, deputy chief of security in the VRS Main Staff, joined Nikolic’s department. At that time, the accused Tolimir was the assistant commander for intelligence and security of the VRS Main Staff. Jankovic told Nikolic he had come to assist in the implementation ‘of this major operation’, Krivaja 95.

After the fall of Srebrenica, on 11 July 1995, the people from the enclave headed towards Potocari in a huge column of refugees. Nikolic was ordered to provide security for the meetings in the Fontana Hotel in Bratunac, where General Mladic met with the UN Dutch Battalion commander, Colonel Karremans. That same evening and on the next day, Mladic met with the representatives of the refugees from Srebrenica. Before the third meeting, on 12 July 1995, Nikolic talked with the two officers from the Drina Corps who were his superiors, Colonel Svetozar Kosoric, in charge of intelligence, and security officer Vujadin Popovic. Popovic told Nikolic that all the men in Potocari, close to 2,000 of them according to his estimate, would be arrested and detained. When he was asked what would happen to them then, Popovic replied, ‘all the Balijas [derogatory word for Muslims] should be killed’.

On 12 and 13 July 1995, Nikolic secured the Potocari-Bratunac road, which General Mladic was supposed to take. The commander of the VRS Main Staff made a stop in Konjevic Polje on 13 July 1995 and promised the Bosniak captives he met there that they would be transferred to Kladanj. Kladanj was controlled by the BH Army. Nikolic claims that when he asked Mladic what would happen with those men, Mladic only waved his hand in a way that the witness took to mean they should be killed. ‘To oppose Mladic at that time was tantamount to suicide’, Nikolic said, explaining why he didn’t do anything when he realized the danger that the captured Bosniaks faced.

As Nikolic recounted, Ljubisa Beara, chief of security in the VRS Main Staff, and Miroslav Deronjic, president of the Bratunac municipality and Karadzic’s commissioner for civilian affairs in Srebrenica, met in Bratunac the next day and discussed the execution of prisoners. Beara and Deronjic argued about where the prisoners would be put, referring to what their respective ‘bosses’, Mladic and Karadzic, had told them. Nevertheless, both Beara and Deronjic agreed that the prisoners should be killed, Nikolic claimed. As Nikolic put it, it was ‘implicit’.

At the end of the examination-in chief, the former chief of security and intelligence in the VRS Bratunac Brigade confirmed his involvement in the effort to exhume and relocate the bodies from the mass graves in the area of responsibility of the Bratunac Brigade, in September and October 1995. The operation was referred to as ‘clean-up’, but it was not correct military terminology, Nikolic said. Although it was planned as a covert operation, it involved too many civilian and military institutions and could not remain secret. The prosecutor asked the witness why the operation was meant to be secret. ‘Most likely because it was supposed to cover up the evidence of crimes’, Nikolic replied.

The accused general, who served as Mladic’s assistant for security and intelligence in the VRS Main Staff, will cross-examine the former Bratunac Brigade security officer tomorrow. Tolimir faces charges of genocide and other crimes in Srebrenica and Zepa.