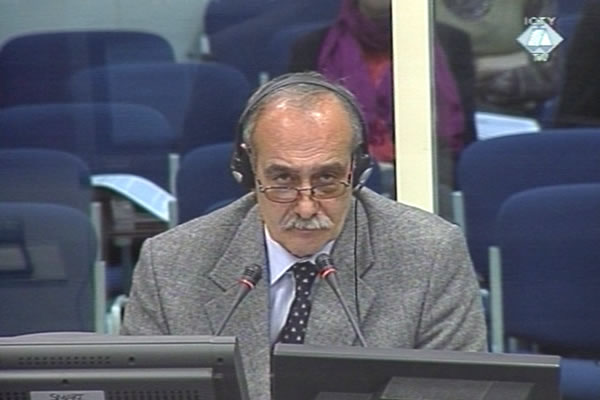 Today Zdravko Tolimir quoted from a document the prosecutor used to show his intention to use chemical weapons in Zepa in July 1995. Tolimir repeated a sentence in which he proposed to use ‘chemical agents’ to speed up the surrender of BH Army soldiers from Zepa and the fall of the enclave. Prosecution witness Ljubomir Obradovic, former chief of the operations department in the VRS Main Staff, agreed with the claims of the accused that the ‘agents are not the same as weapons’. Yet yesterday when he was examined by the prosecution, Obradovic didn’t note the difference.

According to Tolimir, chemical agents are ‘not-lethal agents with temporary effects, delivered in the form of hand grenades or short-range rifle-launched grenades’. It was just ‘tear gas’, Obradovic confirmed, agreeing with Tolimir’s suggestion that it was the same chemical substance used in sprays ‘women use for self-defense’. Chemical weapons, on the other hand, are lethal chemicals delivered in long-range rounds, the accused and the witness agreed.

Yesterday in his examination-in chief Obradovic said that Tolimir’s suggestion was most probably an attempt to deceive and intimidate the enemy. Obradovic thus implied that the accused general in fact never intended to use chemical agents, be they ‘agents’ or ‘weapons’. Judge Mindua reacted when the witness today seemed to accept the explanation about Tolimir’s intention to use just teargas, asking the witness to explain if it meant that he recanted the interpretation he gave in court yesterday. The witness evaded a direct answer, saying that yesterday he ‘only mentioned the possibility’ (that the purpose was to deceive and intimidate). Insisting once again on the difference between ‘chemical agents and chemical weapons’, the witness again agreed with the claim of the accused that in July 1995 he proposed that only tear gas be used in Zepa.

At the beginning of Obradovic’s re-examination, prosecutor Peter McCloskey noted he had evidence that the chemical agents Tolimir spoke of contained ‘more than just tear gas’. This was in fact the reason why McCloskey wanted to ask the witness some more questions. The hearing today was extended beyond the usual time, but McCloskey still had some questions left for the witness at the end of it. The judges will decide later if the witness should return to The Hague to be re-examined by the prosecution.