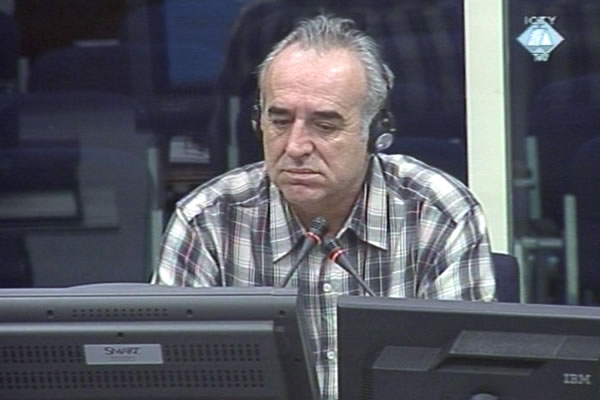 In the period before the VRS launched its Srebrenica operation, the enclave, nominally protected by the UN, was exposed to growing pressure from the Bosnian Serb forces. Momir Nikolic, former chief of intelligence and security in the VRS Bratunac Brigade, described the events as he continued his evidence today at the trial of Zdravko Tolimir. Nikolic is currently serving a 20-year sentence after he pleaded guilty to the Srebrenica crimes in 2003.

The zone was put under increasing pressure by blocking the convoys that brought in supplies to the people of Srebrenica and to UNPROFOR and other international organizations whose representatives were stationed in the enclave after it was declared a protected area in 1993, Nikolic said. At the time, Nikolic also acted as a liaison officer with UNPROFOR, and supervised the checking of convoys entering and leaving the enclave. The permits for the convoys to pass through were issued only by the VRS Main Staff. Nikolic’s only task was to make sure that only the contents listed in the pass reached the enclave.

The prosecutor showed the witness a series of documents in which the VRS planned restrictive measures towards the enclave. One of the documents is an order by the VRS Drina Corps commander Milenko Zivanovic from July 1994. In addition to blocking the convoys, his soldiers are ordered to restrict movement on the Srebrenica-Zepa, Srebrenica-Kladanj and Srebrenica-Tuzla roads and to train and equip snipers in the Drina Corps units in that area. Nikolic confirmed that he had obeyed this order. As the Srebrenica operation neared, the VRS measures against the enclave grew even more restrictive: the final goal was ‘the elimination of the enclave’. The measures were to encourage the people to leave Srebrenica and to reduce the operational readiness of the UN Dutch Battalion, thus lessening its ability to launch any efficient action against the VRS troops.

In late June 1995, the VRS captured an UNPROFOR check point and forced the Dutch Battalion to withdraw from the position ‘at the intersection of the roads for Skelani and Milici, south of Srebrenica’. The VRS claimed that Checkpoint Echo was located outside of the enclave and asked that it be moved back 300 to 400 m towards Srebrenica. In their reply, the Dutch insisted that they didn’t have the mandate to change the borders of the enclave and that only the UN Security Council could do it. General Zivanovic then ordered the check point to be taken, Nikolic recounted.

This prompted the prosecutor to ask why it was important to take this position. It made it easier to enter the enclave, Nikolic replied, and indeed this is what happened soon afterwards. Momir Nikolic continues his evidence tomorrow.