In the final part of his cross-examination of former UNPROFOR commander Rupert Smith, General Tolimir again accused the UN troops of ‘violating their mandate’, ‘siding with Bosniaks and Croats’ and ‘using force’ against the Serb troops when they entered the enclave which was nominally under the UN protection in July 1995. Tolimir is on trial for genocide and other crimes in Srebrenica and Zepa in 1995 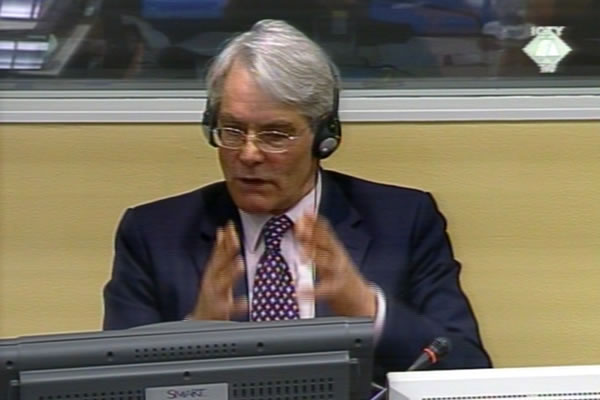 On the fifth day of the testimony of British general Rupert Smith, who commanded UNPROFOR in BH, the accused general Zdravko Tolimir continued pursuing his argument that the UN and NATO ‘sided with Bosniaks and Croats’ against the Bosnian Serbs and their army in the war in BH.

General Smith dismissed the accusations of Mladic’s former assistant for security, and disagreed with Tolimir’s suggestion that the international forces aided the BH Army in July 1995, supplying it with arms, ammunition and fuel by smuggling them through in the convoys carrying humanitarian aid for the civilians.

According to the accused general, the use of force by the UN Dutch Battalion in Srebrenica in July 1995 meant in fact that the peace-keepers clearly supported one of the warring sides. Tolimir maintained that UNPROFOR thus violated the mandate given to it by the UN Security Council. The British general rejected Tolimir’s claims, stressing that in Srebrenica and Zepa, UNPROFOR acted in line with its powers, and the obligations it had under its mandate to protect the civilian population in the protected zones.

The prosecutor returned to the issue in the re-examination, referring to Security Council Resolutions 834 and 836 which spelled out UNPROFOR’s mandate. The two resolutions covered UNPROFOR operations based on the so-called ‘green order’ issued in July 1995 by the Dutch Battalion command, in hope that it will be able to prevent the entry of Mladic’s troops into the Srebrenica enclave, Smith explained.

Contesting Tolimir’s claim that the ‘green order’ – allowing UNPROFOR to use force –was a violation of the peace-keepers’ mandate and meant that they sided with the Bosniaks, the prosecutor asked the witness if and when such orders could be issued in BH.

General Smith explained that it was a step the peace-keepers took if any side threatened UNPROFOR checkpoints established to prevent the fall of the protected zone. According to Smith, ‘a limit’ was clearly set and to cross it meant that UNPROFOR would ‘take off their blue helmets and put on green ones’ and engage the troops that crossed the limit.

Tolimir is charged with genocide and other crimes in July 1995 in Srebrenica and Zepa. On 9 June 1995 the Dutch ‘blue helmets’ received a ‘green order’ and set up blockade points. They were however unable to stop Mladic’s forces from crossing a ‘clear limit’ they had drawn and prevent the fall of enclave and ensuing crimes.