On the third day of the cross-examination of former UNPROFOR commander in BH General Rupert Smith, the accused General Zdravko Tolimir sought to corroborate yet again his argument that the UN troops in BH were partial. According to Tolimir, the UN forces in BH ‘sided with one of the parties in the conflict’: they supported and assisted the BH Army in its attacks against the VRS 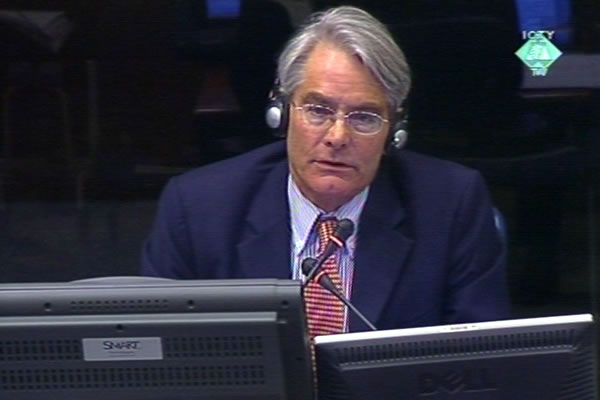 According to Tolimir, during the war in BH UNPROFOR tried to introduce ‘cooperative democracy’ that was ‘defended with Tomahawk missiles’. The international forces sided with the BH Army, because they considered it was ‘willing to cooperate’ while the VRS was ‘non-cooperative’, and was punished by NATO air strikes, Mladic’s former assistant for security claimed.

In vain the British general strove to explain to the accused that the NATO airstrikes launched on 30 August 1995 had nothing to do with the failure of the Bosnian Serbs to cooperate, but were ‘the direct consequence and response to the mortar attack on the Markale town market in the protected zone of Sarajevo which caused a lot of civilian casualties’. Tolimir denied that the VRS was responsible for the Markale massacre. Mladic demanded that a joint commission be established to investigate the incident, he contended. According to Tolimir, General Smith ‘is not a ballistics expert’ and was not in a position to establish the point from which the fatal mortar shell was fired. Tolimir also denied that the VRS was responsible for the first Markale massacre. According to Tolimir, it was ‘established’ at the Karadzic trial that the ‘shell was dropped down from a roof’. Tolimir also claimed that the commander of the ‘blue helmets’ in Gorazde in mid-May 1995 informed the Bosniak State Security Service that Tuzla ‘will soon be shelled’. It was indeed: on 25 May 1995, more than 70 persons were killed at Kapija in Tuzla.

General Smith then tried to explain to the accused that at the London conference –convened after the fall of Srebrenica and the massacre that followed – the representatives of the countries contributing troops to UNPROFOR decided that if the attacks on the protected areas resumed, the UN military commanders could order air strikes that would continue until exclusion zones or protected zones were reestablished. Tolimir didn’t accept this explanation. Tolimir compared the airstrikes against the VRS positions in late August and early September 1995 to the current intervention of the international coalition in Libya, describing it as ‘humanitarian airstrikes’. This prompted the presiding judge to intervene, cautioning the accused that this trial was about the events in Srebrenica and Zepa in 1995 and attempts to shift the focus on the current events in Libya were inappropriate.

General Rupert Smith will complete his evidence on Monday.