TOLIMIR: BH GOVERNMENT, VRS AND UN AGREED ABOUT THE EVACUATION OF ZEPA

In July 1995, the warring factions and UNPROFOR agreed to evacuate the people of Zepa, but only the Bosnian Serbs are blamed for their exodus, claims General Zdravko Tolimir. Tolimir is charged with genocide and other crimes in Srebrenica and Zepa in 1995 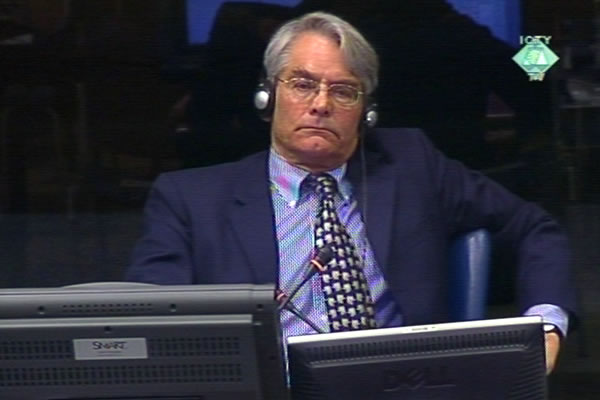 The people in the Zepa protected area were evacuated in late July 1995 in line with an agreement reached by ‘all three sides’: the BH government, the VRS and UNPROFOR and all three sides took part in it, claimed the accused Zdravko Tolimir, Mladic’s former assistant for security, as he cross-examined General Rupert Smith, who commanded the UN troops in BH at the time.

Despite ‘the joint agreement’ and the fact that everyone took part in the evacuation, only one side – the Serb side – is blamed for the expulsion of the civilian population of Zepa, Tolimir said. He corroborated his claim about ‘a consensual evacuation’ with the correspondence between Alija Izetbegovic and the war presidency of Zepa which states that General Smith ‘guarantees the safety of the evacuation of women, children and the elderly from the enclave’.

Izetbegovic expressed great concern for the civilians, Smith said, but was unable to recount any details from his conversation with Izetbegovic on 18 July 1995. Smith couldn’t remember if he ‘used the term guarantee’ when they spoke about taking care of civilians.

Smith also noted the circumstances under which the population in the enclave abandoned their homes, saying that ‘the enclave had fallen and they found themselves surrounded by the VRS soldiers’. In his next question, Tolimir put it to Smith that no VRS soldiers had entered Zepa before the evacuation. The British general reminded Tolimir that Tolimir himself, armed and escorted by Serb soldiers, was in Zepa at the time and was ‘telling the population to leave’.

Tolimir indicated, he would play a recording tomorrow which would prove that he was as responsible for the evacuation of Zepa as the UNPROFOR soldiers who were there when the population boarded the buses and left the enclave.

Today Tolimir tried to defend the late Serbian president Slobodan Milosevic, noting that Milosevic had made it possible for hundreds of BH Army soldiers to cross from Zepa to Serbia where they were placed under the protection of the International Red Cross. Insisting on Milosevic’s credit will not necessarily favor the VRS and the accused general, since the prosecution has an intercepted conversation in which General Krstic, Drina Corps commander, and Colonel Beara, who was the security chief in the Main Staff complain that Milosevic is refusing to send back hundreds of ‘their Turks’ who had fled from Zepa and crossed the Drina river into Serbia. Tolimir was Colonel Beara’s immediate superior.