The accused Zdravko Tolimir continues his cross-examination of General Rupert Smith. Using a series of documents about the fall of Zepa in July 1995, Tolimir tried to corroborate his argument that the BH authorities stalled the negotiations about the surrender of the enclave and obstructed the evacuation of the people although the ‘official negotiators of the Muslim side’ signed an agreement to that effect 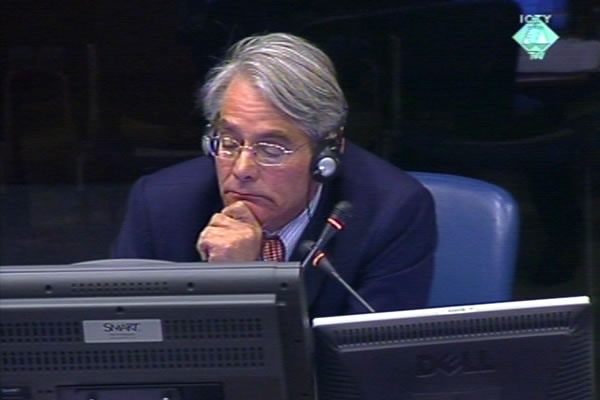 According to General Zdravko Tolimir, the VRS in Zepa acted in line with the three agreements signed between 19 and 27 July 1995 with the war presidency of the enclave. Tolimir is on trial for genocide and other crimes in Srebrenica and Zepa.

Insisting on the contents of those agreements, Tolimir put it to General Rupert Smith that they were signed by ‘the legitimate representatives of Zepa’ acting in the interest of the entire population of the enclave, who agreed that all men of military age should surrender and lay down their arms in the presence of UNPROFOR and then be registered by the International Committee of the Red Cross and evacuated to the BH Army-controlled territory.

The British general, who commanded UNPROFOR in BH at the time, acted as a mediator in the negotiations between the warring sides. General Smith rejected Tolimir’s suggestion. ‘You’re swapping causes and effects constantly’, Smith said. He explained that the wish of the people in Zepa and their representatives to leave the enclave was not the reason why the agreement was concluded. The agreement was a consequence of the occupation and the firm control the VRS exerted in the enclave. According to the British general, the agreement of 27 July 1995, quoted repeatedly by the accused, was in fact an agreement ‘signed under duress’.

Tolimir tried to convince the judges that the Zepa war presidency members who had signed the agreement were not pressured by the VRS but by the BH government. BH president Alija Izetbegovic obstructed the negotiations and the implementation of all three agreements signed on 19, 24 and 27 July 1995, the accused argued. Tolimir brought up a letter written by Colonel Avdo Palic to President Izetbegovic. In the letter Palic, who commanded the defense of Zepa, says that ‘the representative of Zepa is negotiating’ with the VRS, asking the president to agree with the proposal to exchange the prisoners with Bosnian Serbs and to organize helicopters to evacuate the troops.

According to Tolimir, Palic’s letter clearly shows that he had accepted the ‘representative of Zepa’ in the negotiations as the representative of the military forces in the enclave and had asked the president to assist with the evacuation. General Smith rejected Tolimir’s explanation. As the witness explained, the military forces are seldom under the control of the local civilian authorities because they are always used at the state level. This is why local military commanders cannot be subordinated to local civilian authorities, Smith believes.

In the end, Tolimir put it to General Smith that in Zepa, he as Mladic’s assistant for security merely implemented the agreement that the British general had helped conclude. General Smith dismissed the suggestion. ‘The agreement was concluded as a result of your attack on the protected zone’, Smith said. After the attack on Zepa and the events in Srebrenica, it was necessary to evacuate the people, and they were indeed evacuated, Smith claimed. The British general said that he had asked Mladic to conduct the evacuation publicly in order to minimize the possibility of a replay of the events in Srebrenica, which had already come to light.