PRALJAK: WITH A CLEAR CONSCIENCE AND WITHOUT ANY GUILT

In the final part of his closing argument, General Slobodan Praljak argued that he is ‘not guilty’ and that his ‘conscience is clear’, adding that he counts on the presiding judge Antonetti and his just adjudication of facts. The defense of General Milivoj Petkovic began its closing arguments later today 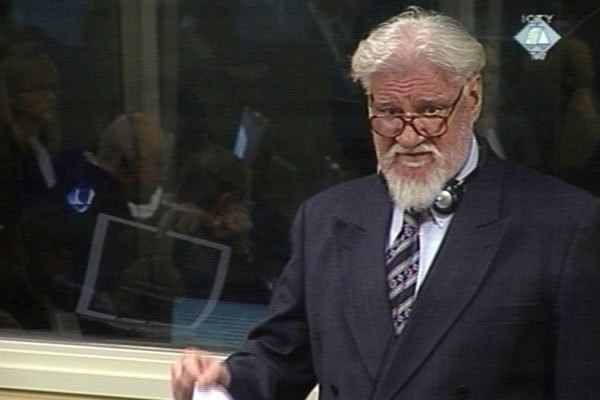 Slobodan Praljak during his closing statement

‘I am not guilty’, General Slobodan Praljak said in his 30-minute address to the judges in the final part of his defense’s closing arguments. He reached this conclusion, Praljak explained, by ‘rational logic that has been critically verified dozens of times’.

As Praljak put it, the prosecution’s allegations about the joint criminal enterprise were ‘offensive even for the cognitive system of a pathogenic virus’. Praljak argued that the Croatian policy toward BH was to provide support and help during the entire war; in the history of warfare, no other nation supported another as much as the Croats supported Muslims. This is why Praljak does ‘not renounce the national policy pursued by Dr. Franjo Tudjman’ because it ‘created the Republic of Croatia and ensured the existence of BH’. Praljak also didn’t renounce Herceg Bosna because it was ‘an expression of the will of the Croats in BH’.

Resentful because the prosecutor compared him in the closing arguments ‘to Nazi Göring, and what he did in the Holocaust’, Praljak listed a series of situations in which he personally intervened to help – as he put it – ‘Jews/Muslims’. Praljak criticized judges Arpad Prandler and Stefan Trechsel because they refused to admit into evidence about 150 statements that spoke of Praljak’s ‘acts’.

‘My conscience is clear’, Praljak concluded, saying, ‘I will courageously reexamine my own attitude about my responsibility’ if Judge Antonetti – who he believed was a just man – found him guilty. However, ‘if the interpretation of the facts is not good enough’, then he will have no choice but to believe that he is in prison just ‘because the Tribunal has the power’.

Vesna Alaburic, General Milivoj Petkovic’s lawyer, took the floor. Alaburic urged the judges not to heed the prosecutor’s appeal to ‘listen to voice of the victims’. While deliberating on the evidence the Trial Chamber ‘should not rely on anyone outside of the courtroom’.

Denying the existence of the joint criminal enterprise, Alaburic noted that Herceg Bosna couldn’t be considered as occupied BH territory, for a very simple reason: the occupier was not a foreign force but the HVO, whose soldiers belonged to one of the three constituent peoples in BH.

As the defense noted, the mass arrests of Muslims in July 1993 were justified because the Muslims were a ‘security threat’ to the HVO. According to the defense, Muslim men of military age – placed in ‘isolation’ by the HVO on Petkovic’s orders – were in effect ‘reserve forces of the BH Army’. On the other hand, the defense argued, the Muslim soldiers in the HVO ranks who were ‘isolated’ on the same orders, were not under the jurisdiction of the Tribunal but of local courts.

Milivoj Petkovic’s defense will continue its closing arguments tomorrow, and will be followed by Valentin Coric’s defense.