General Slobodan Praljak’s defense continued its closing arguments claiming that Croatia’s interest in the situation in BH was ‘legitimate’; it did not go beyond protecting its own borders and the interests of Croats in BH. Praljak was a ‘peacemaker’ who ‘went to BH to defend his homeland’ 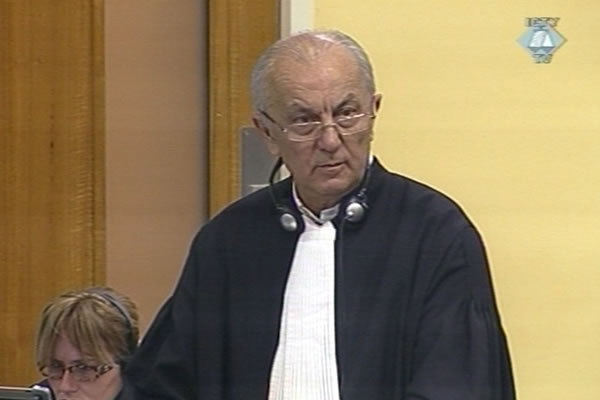 ‘Croatia participated in the war in BH not because it wanted to, but because it had to’, lawyer Bozidar Kovacevic said as he continued his closing arguments at the trial of the former Herceg Bosna leaders. Kovacevic, who is defending General Slobodan Praljak, said that Croatia had a ‘legitimate interest in the situation in BH’ because the JNA attacked its territory from BH.

According to the defense, Croatia had ‘a legitimate interest in the situation in BH and was forced to take measures to put a stop to the chaos and to establish cooperation with the HVO’, to protect the Croatian borders and the interests of Croats in BH. Croatia was among the first countries to recognize BH, the defense noted, and it received Bosniak refugees expelled by the Serb forces. Croatia also provided weapons to the BH Army and helped the HVO to defend BH.

The defense contends that Praljak was not an agent of the Republic of Croatia and that he didn’t serve as liaison between the Croatian leadership and the Bosnian Croat leaders, as the prosecution argued. Praljak simply went to BH to ‘defend his homeland’. The defense noted that Praljak’s role in the conflict between the HVO and BH Army in the period from October 1992 and July 1993 was strictly ‘peaceful’.

After eight months of ‘the effort to ease the tensions’ between the BH Army and the HVO, on 24 July 1993 Praljak was appointed the commander of the HVO Main Staff. The defense didn’t contest the fact, but noted that the appointment occurred amid a ‘fierce’ offensive of the BH Army whose objective was to capture the territory and reach the sea. Praljak thus was constantly on the defensive, from the moment he was appointed the ‘de facto’ HVO commander.

According to the defense, the prosecutor has failed to prove that the HVO under Praljak’s command committed the crimes against Muslims that are alleged in the indictment and that Praljak knew about the crimes. Also, according to the defense, the HVO Main Staff was not in charge of allowing the humanitarian convoys through. HVO Main Staff was also not in charge of the HVO ‘reception center’ as co-counsel Nika Pinter called the HVO prisons and camps.

‘Of all the things we heard from the prosecutor in the closing arguments I will agree with just one: his own assessment that he may not have set the case as best he could and that perhaps did not run it in the best possible way’, Pinter noted, and finally called for Praljak’s acquittal on all counts in the indictment.

Praljak’s defense has about half an hour left of the five hours it was allotted for its closing arguments. As it was indicated, the accused will use this time on Monday. After that the defense teams of the three remaining accused – Milivoj Petkovic, Valentin Coric and Berislav Pusic – will deliver their closing arguments.