Testifying at the trial of General Momcilo Perisic, Mile Novakovic, former commander of the Serbian Army of Krajina, contends that the VJ officers would come to serve in the SVK for a few months, touring Krajina as ‘tourists to play at war" 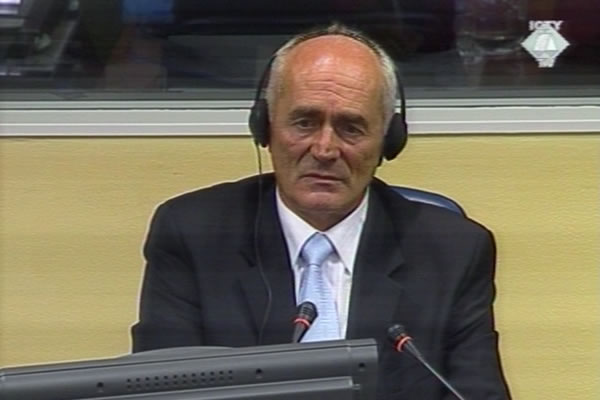 Mile Novakovic, defence witness of Momcilo Perisic
Former commander of the Serbian Army of Krajina Mile Novakovic continues his evidence at the trial of General Momcilo Perisic. Novakovic contends that in early 1993, the officers of the VJ toured Krajina ‘as tourists to play at war’. They would come for two or three months to ‘fulfill their obligation’ and their attitude towards defending the people was ‘insincere’.

As the witness explained, the SVK personnel had ‘a bad, disparaging’ attitude towards their guests from the VJ because those were mostly ‘persons of higher rank, sitting in the offices in the headquarters and were not of much use’. Quite the contrary, the witness said, the SVK staffs and commands ‘lost face among fighters’ because of the visiting officers from the VJ.

Novakovic says that he asked for personnel for the SVK from both General Perisic and his predecessor at the post of the chief of the VJ General Staff, General Panic. When Novakovic asked for 750 officers, Panic told him he could ‘disband the VJ’ if he gave him so many officers. Novakovic was given only 78 officers. They were naval, computer and air force experts: specialties not required by the SVK. As the witness said, Perisic ‘showed understanding but not ability to solve the problem’. The Yugoslav Army was in ‘such a bad shape’ that it was ‘a crying shame’. Novakovic knew that the VJ could not help the SVK ‘without disrupting the basic purpose of its existence’.

In an effort to highlight Perisic’s views on the secondment of VJ personnel to the SVK, the defense counsel showed an entry from Ratko Mladic’s diary dated 24 September 1993. In the note Mladic describes a meeting of the military leaderships of the RS, RSK and the FRY with Slobodan Milosevic. At the meeting, General Perisic notes that the SVK should be given ‘support in personnel’ based on the ‘voluntary’ principle. All persons originally from Krajina ‘should be persuaded to go there as much as possible’.

According to Mladic’s diary, the participants discussed ‘the supply of weapons, ammunition and fuel’, officers’ status and financial support to the Serb armies in Bosnia and Krajina. Novakovic confirmed this, but noted that the VJ did not have enough equipment and materiel and could thus not meet the SVK’s demands.

General Momcilo Perisic is charged, as the chief of the VJ General Staff, with providing personnel, financial, logistical and other support to the Serbian Army of Krajina. The prosecution alleges that General Perisic thus contributed to their crimes in the shelling of Zagreb in May 1995.