GENERAL PERISIC WAS ‘TILTING AT WINDMILLS’

Defense witness Dragan Vuksic likened Momcilo Perisic’s efforts to convince Ratko Mladic that he was wrong to ‘tilting against windmills in Holland’. Perisic ‘used his influence’ and ‘brought to an end the ugly affair’ of French hostages 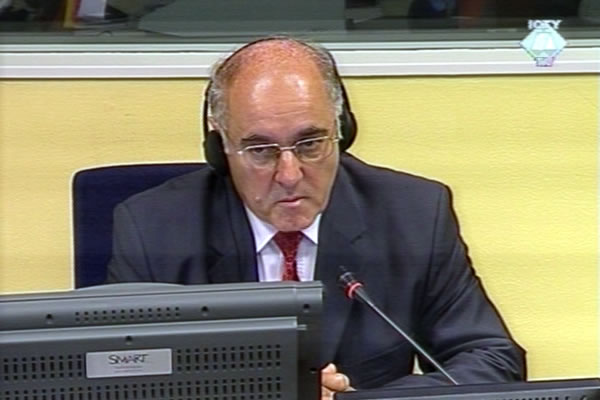 Dragan Vuksic, witness at the Momcilo Perisic trial
Colonel Dragan Vuksic, former chief of the VJ Administration for International Military Cooperation, noted that the accused general Momcilo Perisic played an ‘important role’ in the release of the French hostages detained by the VRS in the spring of 1994. Vuksic said that Perisic had to do a task that was tantamount to ‘tilting against the windmills in Holland’.

In the witness’s words, Perisic had to make it clear to Ratko Mladic that he was wrong and that he had to release the hostages. That was tough, as Perisic ‘did not dare’ criticize Mladic and tell him that he did something bad; in situations like that, conversation became ‘impossible’. This is why Perisic always started the conversation by saying ‘what has happened has happened’, and then asked Mladic to do something that ‘will not cause more damage’.

The defense counsel showed the witness a letter sent to Perisic by the representative of the French armed forces in the Federal Republic of Yugoslavia. The letter concerned the new hostage crisis – this time, the French members of the humanitarian organization Medecins sans Frontiers. ‘The colonel knows well that those who hold hostages are not subordinated to the chief of the VJ General Staff’, the letter says, but ‘he is sure that Perisic will not fail to use his influence and bring this ugly affair to an end’. The witness said that Perisic ‘did use his influence’ and the hostages were released.

Vuksic confirmed that Perisic attached great importance to international efforts to solve the crisis in the former Yugoslavia. As the witness put it, in the VJ ‘the people considered what else the army could do to convince the political leadership to find a political solution for the problems as soon as possible and by any means’. This is why Perisic wrote a letter to Slobodan Milosevic to highlight how important it would be for the Serbian president to meet with the presidents of Russia and the United States, Yeltsin and Clinton, to ‘find a peaceful solution for the crisis in Yugoslavia’. ‘The army was not Slobodan Milosevic’s pet’, Vuksic noted. Milosevic ‘hated the army and favored the police and the paramilitary formations’, the witness specified.

Dragan Vuksic will continue his evidence at the trial of General Perisic tomorrow. General Perisic is charged with providing financial, personnel and logistical support to the Serb armies in Bosnia and Croatia, contributing thus to their crimes in Sarajevo, Zagreb and Srebrenica.