NO SANCTIONS FOR DISOBEYING ORDERS

At the trial of General Perisic, General Petar Skrbic claims there ‘were no legal provisions’ compelling the VJ personnel to perform their military service in other countries. Skrbic also said that there were no sanctions for officers who refused to obey the order and be seconded to the 30th Personnel Center of the VJ General Staff, which, in the prosecution’s view meant the Republika Srpska Army 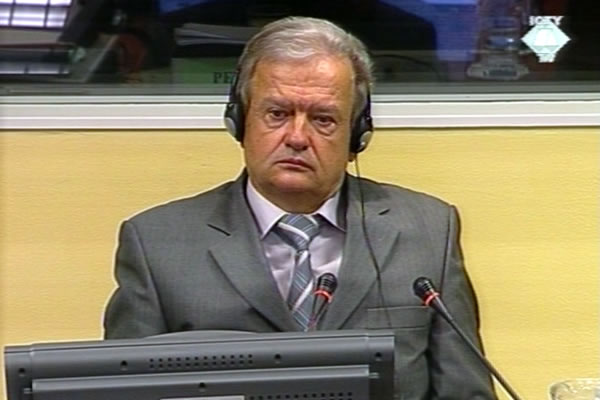 Petar Skrbic, witness at the Momcilo Perisic trial
General Petar Skrbic has been testifying for five days in the defense of General Perisic. Skrbic’s name is on the list of officers that were seconded to the Republika Srpska Army and the Serbian Army of Krajina through the 30th and 40th Personnel Center of the VJ General Staff, as the prosecution alleges. The list is attached as an appendix to the indictment.

According to the indictment, Skrbic assumed the duty of the chief of the Sector for Organization, Mobilization and Personnel Issues in the VRS Main Staff in June 1994. In December 1995, Skrbic was ‘nominally promoted’ to the rank of general major of the VJ. Skrbic however contends that he was ‘in fact promoted’ in the VRS like other officers whose names are listed in the indictment against Perisic.

In the final part of his examination-in chief, Skrbic said that the relation between the commander of the VRS Main Staff Mladic and General Perisic was ‘complicated’. According to Skrbic, Mladic and Perisic respected each other; their conversation was ‘close and friendly’ but their ‘real relationship’ was ‘complex’, the witness said. Skrbic then apologized to Perisic because he might said things ‘that may be unpleasant’ to the accused. The witness completed his examination-in chief with a claim that Perisic ‘never issued any orders’ to Mladic.

Skrbic maintained that his service in the VJ stopped in December 1993 when he was transferred to the VRS 2nd Krajina Corps. In the cross-examination, the prosecutor noted that Skrbic still held the post in the VJ as director of the Military Publishing Center. According to the prosecutor, Skrbic’s service in the Yugoslav Army was officially terminated in 2000. Skrbic explained that his function in the VJ was only ‘formal’, although he agreed that his ‘status of a VJ serviceman’ was terminated only when he was retired in 2000.

Skrbic also said that ‘no VJ officer was threatened with retirement if they refused to obey the order to serve in the VRS or the SVK’. The prosecutor asked him if there were any sanctions for VJ officers who refused the secondment to the 30th Personnel Center, i.e, to the VRS. Skrbic explained that ‘sanctions were not imposed’ because ‘there were no legal grounds’ for that. Judge Moloto then asked Skrbic if there were any legal provisions compelling the VJ personnel to serve in other countries, in this case, in Republika Srpska. ‘As far as I know, there were no such provisions’, Skrbic said.

Perisic is on trial because as the chief of the VJ General Staff he seconded VJ personnel through the 30th and 40th Personnel Center to the VRS and the SVK. Apart from personnel support, Perisic also provided logistical, financial and other support to the Serbs in Bosnia and Krajina. As the prosecution alleges, Perisic thus contributed to their crimes in Sarajevo, Zagreb and Srebrenica.