Former commander of the SVK, Mile Novakovic commanded Operation Spider; his codename was Spider. The prosecution alleges that for the operation launched in Western Bosnia, Novakovic asked for ‘logistics and equipment’ support from the VJ 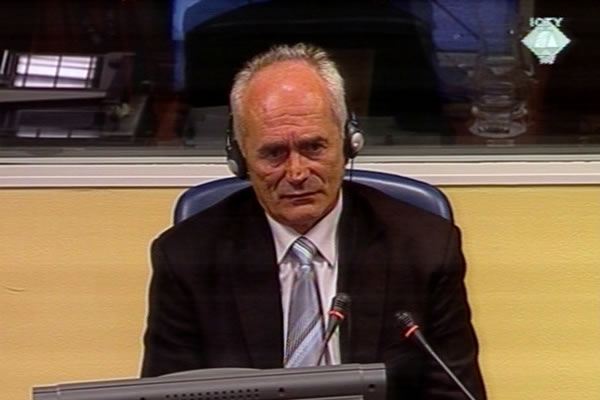 Mile Novakovic, defence witness of Momcilo Perisic
The prosecution today continues cross-examining Mile Novakovic, former commander of the SVK (Serbian Army of Krajina), testifying in General Perisic’s defense. In an effort to impeach the witness, the prosecutor asked him about his command over Operation Spider in late 1994 and in 1995. Novakovic claims he had command powers in combat and he personally exercised command over the operation; his codename was Spider.

Novakovic first said that Operation Spider was ‘humanitarian’: the goal was to bring back home refugees from the territory of the Autonomous Region of Western Bosnia and fighters loyal to Fikret Abdic. Then Novakovic confirmed the prosecutor’s suggestion that one of the operation’s objectives was to ‘engage the BH Army’s 5th Corps’. According to Novakovic, the operation included units of the VRS, the SVK, ‘individuals’ from the Serbian MUP and Fikret Abdic’s forces. The VJ didn’t take part in combat, Novakovic said.

The prosecutor showed Novakovic an agreement from July 1994 drafted between the VRS, the SVK and the VJ to launch operations against the BH Army 5th Corps. Novakovic, who at the time was assistant for national security to the supreme commander of the RSK, claimed never to have seen that agreement.

As the commander of Operation Spider, Novakovic had to send regular combat reports about the activities in the operation, the prosecutor argued. As Novakovic said, he sent those reports to the SVK, the Serbian state security service, and ‘from time to time to the VJ General Staff’. When he sent reports to the VJ General Staff, Novakovic explained, they were in the form of ‘notices’ to ‘inform’ the chief of the VJ General Staff ‘about the developments and situation in the field’. The prosecutor argued that Novakovic requested ‘logistics and equipment’ from the VJ. The witness in part confirmed this, noting that he would ask for assistance only when he ‘couldn’t obtain supplies from the SVK Main Staff or from Fikret Abdic’.

According to a photo the prosecutor showed Novakovic, Milorad Ulemek Legija and Slobodan Medic Boca, leader of the Scorpions unit, also took part in Operation Spider. Legija was later convicted for the assassination of the Serbian prime minister Djindjic. Novakovic confirmed that Legija participated in Operation Spider, but insisted that Medic’s unit ‘was never committed to combat’. Novakovic said he heard about the Scorpions unit for the first time ‘after the war’ and he ‘was surprised’ because he thought he knew all the units that fought in the war ‘named after dangerous animals’: the Mambas, Cobras, Tigers, Lions, etc.